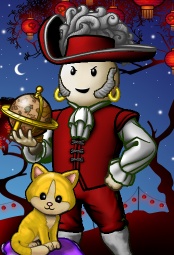 Lowstandrd, aka Low, be a pirate on the Emerald Ocean. He is a fleet officer of the crew Impulse belonging to the flag My John Thomas.

Lowstandrd began his career in piracy on December 25th in the year 2006. He spent a scant few months on the high seas when, out of the blue, the ship he was on was swept up in a typhoon and he was lost at sea. Some were fearin he may never be seen again. Fortunately, in November of 2008 he was found and rescued by Barnaclebess whereupon he promptly joined the crew Domination or Damnation. He has served as an officer in the crew ever since.

After a short ship training with Anelim, Low commissioned his very own sloop the Industrious Roach. He quickly painted his sloop in the Wave of Destruction flag colors of maroon and grey, and set about memming the high seas. After just a few short months of dedicated memming in his new crew, Low successfully completed memming the entire Hunter ocean. He had solo power memmed approximately 98% of the ocean and was added to the list of memming players across Hunter.

On February 8th, 2009, fer his contributions and efforts, Low was dubbed a Lord of the flag Wave of Destruction. Also, March 5th, 2009 Low added to his fleet by purchasing the war brig Bright Mackerel from the pirate Kickhead. Later, April 2nd, 2009 he purchased the merchant brig Innocent Tigerfish from the pirate Themapler.

In January of 2009, Low was also fortunate enough to win his Limited Edition golden cat in an Ocean Event hosted by Hunter's own Quibbler. Quibbler had the good fortune to obtain a serpent and decided to host an ocean event to name the serpent, with first prize being a golden cat. Low won the event with his name submission of "Sir Hiss."

On February 14, 2009 Low won a Cronus OM egg at the Hunter Ocean Valentine's day celebrations in the Kingfisher palace on Quetzal. Cronus and Low then posed fer a portrait to commemorate the day.

On March 24, 2009 Low was announced as one of the winners fer the Armstrong housing name contest ,run by Coerced Coexistence, with his entries of cabin - Momma Said Take a Nap and row house - Sleeper's Delight.