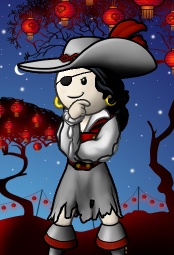 Barnaclebess is a pirate on the Emerald Ocean. She is a fleet officer and drunk of the crew Fade to Black.

Barnaclebess first washed ashore on the Midnight Ocean in April of 2007 as Smugglinann. One of her first adventures was blockading where the sounds and smells of cannon fire left quite an impression on the new pirate. She knew immediately that this was the life for her.

She first joined Mezkay's White Wolves of the flag Midnight Marooners. This was quite an accomplishment as the crew only accepted hard work'n pirates by invitation.

From Midnight, Barnaclebess crossed the seas and landed in the Hunter Ocean. Initially she joined Serenity as a pirate. Veavictis of DG Sea Devils recognized early potential in her and worked hard to recruit her where upon she became a fleet officer. All the while she continued to hone her puzzlin skills. Despite making good friends she decided to leave for the smaller crew Ming's Dynasty of the flag Killer Ming's where she was promoted to senior officer. Her value to the flag was soon recognized by her promotion to royalty. When her captain and king Brinyseadog found himself in need of a leave of absence he requested that she assume command of the crew in his absence. After several months she assumed the role of captain. When he finally returned from his hiatus Barnaclebess stepped back down and returned the rank of captain to Brinyseadog.

In a bold move she decided to create her own crew Domination or Damnation. A crew to be brothers in arms. She was joined by good mates Kiwifluke and Falons. Together they also created the flag Wave of Destruction. This flag and crew made it possible for great mates to stand strong in unity and face anything that might get in their way.

Barnaclebess purchased her first sloop in August of 2007 just a few months after coming to the Hunter ocean. Almost immediately she began foraging and reinvested the money she made into growing her foraging operation on Hunter as well funding her forays into merchanting.

Despite the lure of the high seas Barnaclebess found she wanted to dabble as a merchant on the side if only to generate some much needed spare cash. So in October of 2007 she opened her first stall, a weavery on Aimauri. She found the stalls to be a pleasant distraction and continued to open stalls around the ocean.

The spring of 2008 saw the foraging operation expand to Sage and Viridian. On Sage Bess joined a couple different crews until she finally came to rest with Chrysalis. On Viridian unable to find a crew she was happy with she decided to make her own and dubbed it For the Love of Poe. However the expansion of the foraging operation was short lived as the foraging puzzle released in early fall of 2008 made it impossible to run the operation on more than one ocean. The Viridian fleet was sold off though For the Love of Poe was not disbanded. On Sage Bess still maintains the foraging fleet though the ships remain ported until it is decided what shall become of them.

2009 brought about more changes for Barnaclebess as the demands of being monarch and captain grew it left less time for foraging and merchanting so she closed some stalls and shrunk down the foraging crew. This allowed her more time to sail the high seas with her good mates and valued crewbies/flaggies.