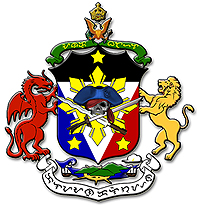 Anak Bathala was a crew that sailed the Viridian Ocean. The crew flew the flag of Piratas Maharlika. Anak Bathala is now dormant.

Upon arriving on the Viridian Ocean, an ambitious pirate named Nordenx rose through the ranks of senior officer in several different crews fairly quickly. Within two weeks time, he acquired enough doubloons to buy his first ship, get a captain's badge, and finally found his own crew on 12 July, 2006, - Anak Bathala (God Spawn) which was named after Nordenx's pet project Anak Bathala. His (in-game and real life) wife Denormanee joined the crew along with their eldest son Marchy. Denormanee became a senior officer and first mate. A few days later, a pirate named Pinoydog joined the crew and worked his way up as the second senior officer of the crew.

Anak Bathala served several flags before being invited to serve under Latin Revolution whose current monarch at the time was Falcus. During a brief war with Christianity, Captain Nordenx proved his worth as an important asset to the flag and King Falcus by showing loyalty, tact, wisdom, and leadership skills during a meeting with captains and royalty in Falcus's Estate. Nordenx earned the respect of his flag mates and soon after he was voted into the royalty and his senior officers were given titles as lord and lady of the flag.

Later on, when Falcus stepped down as monarch of Latin Revolution, disbanded his crew Flota Memetica Imperial, and created ---Fuerza Latina--- then switched back to his and his mates' old flag -Memetica-, Anak Bathala was invited to join them with the promise of retaining Nordenx as royalty and the titles of his original senior officers.

On December 28, 2006, Captain Rgto, who had been a long time hearty of Captain Nordenx, merged his the crew the Demonic Imperials with Anak Bathala.

On January 18, 2007, Anak Bathala left -Memetica- to forge thier own destiny under their own flag Piratas Maharlika (Noble Pirates).

On Febuary 3, 2007, Captain Delema, who had been a long time hearty of Senior Officer Pinoydog, merged his crew the Fate's Demise! with Anak Bathala.

We are Anak Bathala (God Spawn). One day we will be the Maharlikas of Viridian (Lords of these Seas). Until that day comes, we will have fun in our adventures.

Languages that the officers speak: English and Tagalog (Filipino)

Any Officer (Officer, FO, and SO) in this crew, who is online at the time the captain wins at poker (cashed out ahead), receives a cut from the captain's winnings. ...better pray he gets better at poker! The cut is usually 10 to 15% of the PoE cashed out per officer who's online. This is at the Captain's discretion. Also, depending on the Captain's mood, some non-officers (Pirates) may also receive a share (albeit a smaller percentage of it) of the booty.