A crew merge combines two crews by disbanding one crew (the offering crew) and transferring all its members into another (the receiving crew). To propose a merger, go to the crew page, and press the Merge Crew button. In the resulting page, the player proposing the merger enters the name of the crew into which they will be merging and a reason, if needed or desired.

The button panel at the bottom of the crew page.

Who may propose the crew merger will depend on the crew's politics, as that determines who may post an issue. In an autocratic crew, only the captain is permitted. In an oligarchic crew, the senior officers are also permitted to propose a merger. In a democratic crew, anyone above cabin person may propose a merger. In democratic and oligarchic crews, the proposal must be approved by majority vote. 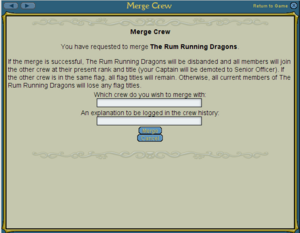 To prevent theft, members of combining crews should remember to lock the helms of their ships before a merge. Any potential mergers should also be discussed between at least the captains of the crews involved.