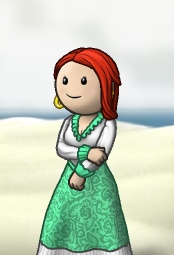 After about a month of quitting YPP, Youshen decided to get back to her dear and trusted friends under IC with a request not to get her involved in any of the flag's future blockades.

Politics and controversies led Youshen from withdrawing as a Titled member under the flag Imperial Coalition and remaining as a regular member under Smash. Albeit, issues followed her and conflicts keep arising leading to her decision to delete almost all her pirates and quit the game.

Youshen left IE due to the main founder having been sick and away. She then helped a friend learn the basics in blockading, thus, joining Chucklenuts under the crew Celestial Nightmares.

Sea monster hunts, blockading, and shoppe/stall manegerials were those she focused on.

Memorizing the rest of Viridian routes and collecting and memming Malachite charts is her priority lately.

Youshen was invited to a new crew to teach new members the basics of Battle Navigation and supervise practices for other piracy puzzles.She met new friends under the flag Immortal Eclipse. On her birthday, she received a familiar as present from Astrangel, Mastereddiez, and Iwnabeu which she named Paraclete.

Youshen was a senior officer and damsel of the crew The Gemmerz and princess of the flag Sisterhood of Wenches on the Viridian Ocean for few months and decided to leave after trust issues.

She became a temporary captain of Auburn's Fire crew with her pirate Endings. She concentrated in raising Ending's stats by applying to traders running their ships before reboots.

Youshen took part in Morrigan's Guards crew as one of the trusted senior officers.

Youshen submitted herself in trying to get funds for the rum production to supply Vanity Rising for the Garden Cradle blockade on October 9th, 2009.

She was favored to step down as titled instead of royalty as she constantly says no to being involved in politics. This action was triggered by a situation within Vanity Rising making her recall all her unexpressed hurt feelings from little things way back the first time she left ImPenDinG InSAnity. Youshen just couldn't help but get tired doing things and seeing no positive changes and very little improvements.

Youshen was trained the XO'ship by a great mercenary who, even with a cold heart doing PVP's, she considered as a precious brother, Mastereddiez.

Youshen met Barhoum who she thought would help answer her questions while they prepared the fleet and stocks for a blockade. They won it and her other alt was made to be the deed owner of the distillery in Garden Cradle for a week. She was invited to join the Sisterhood of Wenches flag. 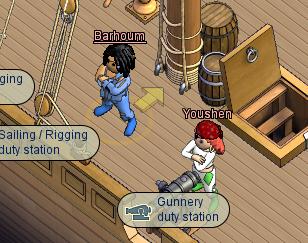 Another lovely and wonderful couple in the game and in real life.

Youshen, after a month under SOW, was married in game with the flag's King, Barhoum.

Youshen was one of the active senior officers of the crew ImPenDinG InSAnity under the flag Vanity Rising headed by Captain Poat, the Pink Lady.

Youshen started as a pirate in The Wrath of Armageddon through the crew Roussea as a recruit of a good person-- whom she calls "my cute, young, bum friend"-- in the name of Cleatus, the original captain of the crew Auburn's Fire. Then, she left to be a fleet officer and sailmaster in a small crew --which was about to be disbanded during that time-- as a recruit of Senior Officer Swan. She also became an iron monger manager along with Redmarlin in Captajnblack's stall. As she was doing pillages with other crews to gain puzzle experience, she met Burhuto who was at the time captain of the small crew Virtual Pillagers under the flag Psychosis. Not long after, Virtual Pillagers merged with ImPenDinG InSAnity.

Poat, Absenth, Brashen, Loverose, Daisygirl, Florentine, Praxair, Sreejitinsan (her shield who she doesn't agree about telling himself he doesn't do much and is a stupid fellow), Shail, and Melrose are her first friends in ImPenDinG InSAnity. She also learned to /fo chat with great persons like Msolange, Fofito, Holograph, Mpk, Apostol, Gingertipsy, Mistypetal, Jezerbelle, Pollywanna, Lancey, and Madrasta. She learned most of the essential stuff from these dear friends.

Time passed and no one escaped change... Impending Insanity soared high and made their new flag, Vanity Rising. Youshen continued pursuing her stats to be fit as SO of the crew. Her learning was governed by senior officer and taskmaster Keelha and her dear friend Burhuto.

"Kind words may be short and easy to speak, but their echoes are endless..." And she keeps this saying in mind whenever she does pillies and interact with other pirates from different parts of the world. 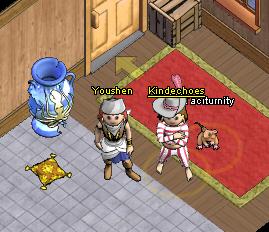 With her roommate Kindechoes and KE's rat Taciturnity

When she's not around Viridian, she tries to drain her unconsumed brain energy in Malachite with the crew Redwall but decided to leave them for a plan of staying with her good friend Cleatus as soon as she meets him there.

She also made another Youshen in Sage and joined the Impending Insanity Crew there.

Youshen was appointed by Cleatus as one of his managers in his ironworking stall on Lima. Lately, she learned how to play poker (at last) because her roommate told her to try it.