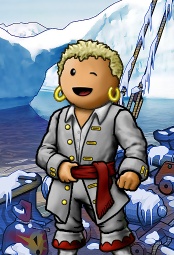 Holograph is currently captain of the crew Death Request and prince of the flag The First Fleet on the Viridian Ocean. He is also currently governor of Viridis Island

Holograph started his pirate career joining Devils Spawn. At the time it was captained by Jordsta, one of Holograph's friends from another game called Habbo. Holograph quickly learned the ropes and was promoted to pirate. After a few pillages Holograph was promoted to officer and learned how to battle navigate, run pillages and most importantly win booty. Holograph was quickly promoted to senior officer not long after.

He was greatly loyal to Jordsta and his crew Devils Spawn. Jordsta handed his crew down to Captinzach and the crew continued to do just fine. Captinzach got banned unfortunatly and the crew fell downhill. Holograph left in search of another crew. After buying his first vessel Childish Gar off a very friendly Lani, Holograph quickly found another crew. Holograph was promoted to officer in Lani's crew Polynesian Pillages and continued to get better at his favorite skill, Gunnery. After a month or so Holograph left Polynesian Pillagers after the enormous amount of rudeness from Elaryin and did not feel welcome.

Holograph joined Star Oceans Apart and stayed as pirate and tried to be promoted to officer. Star Oceans Apart did not work out for Holograph but thought about making his own crew. The idea came from an old Polynesian Pillagers crew mate Ishka. Holograph considered the thought and was in search of a crew name.

Holograph got all his friends that were online at the time and invited them to his cottage. They all got in a circle and started thinking of some crew names. They finally compromised and a name was decided. Holograph decided to take Seanymphia's idea for a crew name and made his crew fast. Holograph was now a very proud captain of the Kraken's Killers.

Holograph continued to run his crew to the best of his ability until late 2006. In November Holograph was on holiday and when he got back, he slowly quit Puzzle Pirates. He logged on every now and then to check his crew and see how it was and left Canukee in charge. Holograph gave Canukee the reins and made him captain. Holograph also left one of his friends from school in charge as well, he was called Brashen.

After a while Holograph decided that it was pointless trying to keep his nearly dead crew running and decided to merge and sell his crew Kraken's Killers. Holograph was thinking about what crew he should merge into. He asked around and found out that Bocara from Star Oceans Apart was going to pay him 80k to merge his crew. He was quick about it and merged into Star Oceans Apart.

Holograph posted news in the Star Oceans Apart crew news section informing everyone that he was returning to Puzzle Pirates. His friends were shocked to finally see him online and he could not wait to spread the news.

After about a week in Star Oceans Apart Holograph decided that this was not the crew for him and was in search for another one.

One of Holograph's hearties Harm came to him and asked if he would join the crew he was in.

After some convincing Holograph joined UMF and became a very loyal member. Holograph made many new friends including the captain Sjieg and one of the senior officers Bloodypie. This was a new leaf in Holographs pirate career and one of the best.

Holograph had many fun moments with all the members of UMF, He met pirates like Minerva, Zino, Snakekiller, Jobbybum, Shev, Queenstown, Misspalmer and many others that he still knows today.

Holograph was a loyal member of Unbreakable Metal Fleet and was a member for about 1 and 1/2 years.

Holograph has many fun memories from UMF.

As much as Holograph loved UMF he is also a man of change. Holograph decided to look for a new crew. He found many good crews but they where not for him. One that he found was Die By The Sword that was apart of the flag Post Mortem. Holograph was in DBTS for about a week until he met a pirate named Va which also owned a crew that was in Post Mortem. Holograph decided to join Sea Lords which was owned by Va. After about a month Va went on vacation and left Holograph as the Captain of Sea Lords. The crew deteriorated because Holograph was dormant at the time. Holograph knew he had to do something and started running daily War Brig and sloop pillages. Holograph got Sea Lords to 80 members and Eminent crew fame and the top 30 crews.

After 3 months of hard work for Sea Lords and the flag Psychosis Holograph decided to make his own crew. The decision came to him after some problems that occurred within the flag Psychosis. Holograph made his new crew with many great friends including Gummybears, Vallyn, Rayaquaza, Arghhpirate, Expirate, Chickpee and many others. After a few days of asking for ideas for crew names a name was chosen. The crew was called Death Request and was named by Minerva. Many other ideas came from other pirates such as Pidgin, Vallyn, Expirate and Hayleycakes.

After 8 days of the crew being created Death Request reached eminent fame and the crew mates strive to improve it.