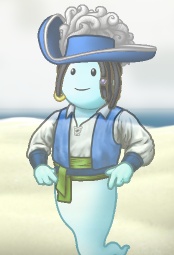 Barhoum is captain and builder of the crew The Gemmerz and king of the flag Sisterhood of Wenches on the Viridian Ocean.

The Captain, the Monarch, the Governor

Barhoum is the captain of the crew The Gemmerz. As a captain, he sees to it that all his members, from the closest SO to him to the newest aspiring recruits, be given chances to learn and work hard to be fit in their ranks or be prepared for promotions.

He makes sure that all crewmates and flaggies are involved in the activities within the flag such as trade runs for their commodities and stalls, CI trips, greeter pillages, Flotilla, Event or Island Blockades, and lots more.

He is a very friendly and approachable pirate and would try to help even the friends of his friends' friends. When it comes to being in the service to others,he doesn't consider their background when being approached personally gaining him tons of great friends from within or outside the flag's alliance ring.

After a year of hard work in establishing the crew and flag,he finally found a soul that would complete the missing pieces of his pirate and real life. On the day before New Year's eve, he planned on marrying his beloved Youshen in Dec. 31, 2009. He tied the knots with her, appointed her to be in line with his trusted royals, and vowed to continue the wenches' motto with her in the presence of their trusted and close friends in the ocean.