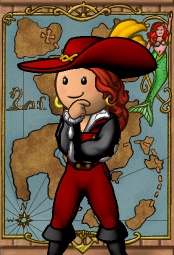 Saturnyne is a pirate formerly from Sage Ocean. She came to be on Lincoln Island, but pirates can now find her on Admiral Island of the Emerald Ocean where she is a captain with the crew Emerald Souls, and is currently not flying a flag.

She began life as a pirate on Lincoln Island. She soon began to travel the sea as an independent pirate, where she acquired the rank of petty officer in the Lincoln Island Navy. She joined many crews, and was helped along the way by numerous pirates, now retired.

Upon joining the crew The Titans, she settled in among crewmates and made instant friends. At the time, The Titans was in the flag Neptune's Fury, both under the watchful eye of Shortcake. She also met Albertross, among others. Things unfortunately got sour, Shortcake left, taking crewmates with her, and The Titans soon left to join the flag Chuck Norris Under it's new captain. But that didn't end well, or last long for that matter -- The Titans then joined Undeclared.

Undeclared ran pillages and SMHs abound and even had a Ventrillo server. There she met the likes of Boiwonder, Twistedtwist, Aldonza, Adna, and Rafikie. It was nice while it lasted, but The Titans left Undeclared to join another flag. Three days later, Saturnyne came to shore and found that they had left the flag. Furious with her captain's decision, which was because "they did nothing for us", Saturnyne posted a crew issue stating that she was leaving, and left for Super Heroes with Boiwonder, and Twistedtwist.

Saturnyne returned home after a year-long vacation to find everyone in her crew dormant, including her captain, Twistedtwist. She regretfully left the crew in search of new adventure.

While pondering her next move on the docks of Admiral Island, a young man by the name of Arntemis complimented her appearance. And once she told him what had happened, he hastily invited her to his crew, Dream Murderers, with arms wide open.

Dream Murderers, part of the flag Nightmares of Sage, welcomed Saturnyne warmly. Quickly climbing the crew ladder to senior officer, she became quick friends with the crew's captain, Missyfiercer. Becoming her protoger of sorts, Missyfiercer promoted Saturnyne to princess of the flag.

Many months flew by, and suddenly, Saturnyne was at a crossroads. Due to a RL issue, Saturnyne left Dream Murderers, and joined TOKEN MASTERS of the flag DEMENTIA AND TERROR where she became a fleet officer.

Saturnyne took another year-long vacation. Upon return, she noticed she had been demoted to officer due to inactivity, and realized that TOKEN MASTERS and their flag, were not where she needed to be. She apologized to the captain, Bresak, and left.

Going to Sho Girls, the inn of Admiral Island, she asked if anyone was looking for members to join their crew. Not searching for long, a gentleman by the name of Javascripter, asked her if she'd like to join.

After much scrutiny of the crew Squiggly Squids, and their flag, Sycodic Darkness, she joined, and was immediately assigned the rank of senior officer, and given titled membership of the flag, where as the next day, was promoted to princess.

Unfortunately, due to another RL verbal fight, this time with Javascripter, Saturnyne left Squiggly Squids/Sycodic Darkness, ultimately giving up her senior officer position, and her royalty title.

All was not loss; she decided to write a new chapter. She created the crew Emerald Souls, an homage to her former captain, Twistedtwist's crew Swindled Souls. Taking a new greenie, Lunakelly, under her wing as her first crew member, she was later joined by the one and only Twisted "mother fucking" Twist, the once famed retired captain, as her senior officer and first mate.

After a few months, however, real life got in the way again. She went dormant, losing her position with United Flag of Immortals. Penny Pinchers, the bank of Lincoln Island, foreclosed on her stall, and she lost thousands of poe.

Upon log in almost a year later, she noticed this and was deeply saddened that her crew had gone dormant. She pops on every now and then to check on things.