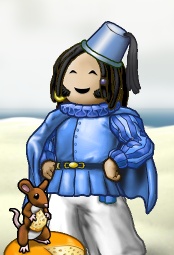 Gypsyhuggy is a fleet officer of the crew Just Because, flying the flag of Good Grief.

On becoming a pirate

Gypsyhuggy was plonked into this world of piracy by the one and only Gypsyjayne. His first weeks were on hunter, getting the basics (discovering that he cant carp AT ALL) and getting the hang of the puzzles when Gypsyjayne caught him sailing and asked "What ocean are you playing?" To which he responded "Dunno, the one with water in?" She proceeded to log him off, change the ocean to Sage and job him into the crew Just Because in the flag Good Grief, (where she was senior officer), so there he was in a crew and ranked as a pirate.

After 3 months of puzzling almost every night he was sold a new Atlantean feathered hat for 498 poe. But alas the scally was of insufficiant rank to wear it. He proceeded to bug a senior officer named Cimanoo about it and after a discussion about the Tweenies, Cimanoo decided to promote Gypsyhuggy to officer then logged off. The next day the captain, Jinxplus, logged on and asked if he had been given officer training...which he hadn't!! He found it was relatively painless as he already knew a lot of the stuff due to observations. He was quickly promoted to officer, (and therefor able to wear his shiny new hat). About 3 months after that he logged on to find he was promoted to fleet officer after a while of getting experience up to solid in some puzzles and received a tell from the captain herself:
"Jinxplus tells ye: random promotions FTW"
"Ye now be ranked Fleet Officer in yer crew"
"Gypsyhuggy says w00t!!!!!!!!"

After Good Grief won Amity Island Gypsyhuggy was voted to be governor of said island. On 13th March 2010 Amity was blockaded again. Something he took very personally what with it being his island and all. Gypsyhuggy defended his island so well that Crazee named him MVP of the blockade!!