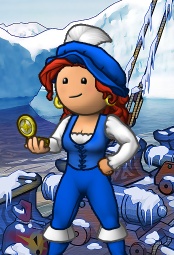 Shortcake is captain of the crew Solitaire and queen of the flag Neptune's Fury. She sails the Sage Ocean.

Shortcake started her pirate career in the crew The Titans of the flag Outcasts. When she met the captain of the Titans, Chim, he made her a pirate in the crew. She quickly proved to be a valuable and loyal crew mate and worked her way up from officer to fleet officer and, finally, to senior officer. Then her captain had enough trust and faith in her to give her the opportunity at the captain's seat while he stepped down to senior officer.

After a long time in the flag Outcasts Shortcake proved to be a valuable part of the flag, and worked very hard that the monarch Wingedhussar gave her royalty. Then after a while Wingedhussar decided to leave the flag and trust Shortcake to take over as monarch of the flag. After a while as monarch of Outcasts Shortcake and the other royals decided to take on a new adventure and make their own flag called Neptune's Fury.

Shortcake also has only one eye now due to being sunk in a blockade, and receiving an injury.