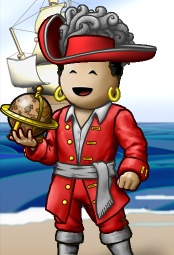 Scarymuffin is currently a senior officer of the crew The Lost Lot and a member of the flag Candy Coated Chaos. He plays mainly on the Sage Ocean. Apart from his piracy skills, he is also well-known for the numerous events he has organized for the Ocean.

Scarymuffin started playing mid-July, 2005 on the Viridian Ocean with the crew The Lost Lot under the captaincy of Tealbeard. When Sage opened, he convinced the crew to move over entirely and start on equal terms against other crews and flags. He quickly advanced in ranks and saw the crew and the flag it founded, The Light Brigade through a golden era where they held top crew and flag fame for weeks and also beat out Red Flag Armada for Spaniel Island.

Scarymuffin completed memming the ocean on November 2nd, 2005 and was promoted to captain of The Lost Lot early December when Tealbeard had to leave due to real life circumstances. Scarymuffin married Princessj on February 10th, 2006 on the Grand Frigate, the Magical Carpetshark (and they lived happily ever after).

When Hunter Ocean opened, Scarymuffin went on and started the first crew of the ocean, Quiescent Tide. He quickly stepped down from captaincy and played on the ocean only occassionally. He won the first saltshaker trinket from a Brigand King on the ocean. During OCL season six, Scarymuffin captained the sea battle team, Deadly Frosting, to win the finals, earning himself and all his teammates each a white monkey.

Currently, Scarymuffin is crew hopping around for the sheer enjoyment of it. He is still running events and involves himself periodically with blockades.