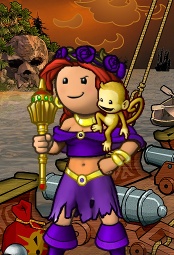 Helystra first appeared on the Sage Ocean August 19th, 2005 (opening night). Having been a greeter on Midnight for several months already, she moved to Sage to create her crew, Hell's Angels, with the intention of teaching new players on a new ocean how to play the game. She also wanted new challenges and hoped to eventually fulfill her YPP dream of owning a tailor shoppe. Hell's Angels became the 10th crew created on Sage's opening day.

On April 22, 2006, Helystra announced that she was stepping down as captain of Hell's Angels with the intention of retiring after the blockade at Caravanserai in May.

On May 13th, 2006, Helystra led her flag Hell's Wrath to victory at Caravanserai I. The battle was hard fought and turned out to be one of the most memorable blockades on Sage. The following weekend, however, the island was lost. A short time later Helystra resumed her post as Captain of Hell's Angels.

In June of 2006, weary of the game and the politics and wanting to take a step back from her role in the game, Helystra gave up her flag and merged her crews with the flag Deadman's Vengeance under her old friend Ivanthered. This proved to be short lived when the crews of Hell's Wrath outvoted Helystra to re-open HW making her Monarch again. It was during her stay with DV that Hely met Nikolaas. A few months down the road they would join Redbeard and they three of them would create a new flag together.

Hell's Wrath re-opened at the beginning of July, 2006 with Hely as it's Monarch once again. As a gesture of friendship and in return for all the support he'd shown the alliance in the past, Hely and HW entered the first 24 hour blockade with the sole intention of opening Scrimshaw island for Evilard and Hardcore Explorers. They'd been planning and preparing for that island for almost a year. HW won the blockade and opened the island as promised for HE. She went on to vice-admiral the Scrimshaw I and Admiral blockades for Evilard.

In October of 2006, Helystra announced publicly that she would be taking a break from the game indefinately. She came back long enough to merge the crews from her flag into a new flag Mind Games along with The Black Crows (captained by Nikolaas) and Forget About It (captained by Redbeard).

In November of 2006, the pirate Helystra retired from the Sage ocean for good. She would later turn over the reigns of the dormant flag, HW, over to Ang and her crew to Bluemacaw. It's rumored that the player behind the pirate, along with another pirate captain, moved to another ocean and changed their names.