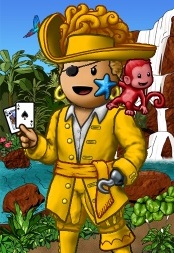 Peperox, a pirate on the Obsidian Ocean, began playing Puzzle Pirates in July of 2005. He is the son of Betorox who has been playing with Peperox since December of 2005 on Midnight Ocean, and from 2005 to 2017 on Viridian Ocean.

When he first started back in 2005, Peperox's english wasn't great, making it harder for him to meet friends in game. In January of 2006, Peperox and Betorox began playing on the Viridian Ocean to meet new pirates and embark on new adventures. During their first 2 years of playing, Peperox and Betorox managed to make their crew, Heroes, the #1 crew in the ocean, with almost 1.000 players!

After that it was time to create their first flag, Collateral Damage. Alongside with Ochubb and Moedefoe, Betorox and Peperox created the flag and bought Olive Island from Scupperer (who won Olive from Calais because he supported Calais on Jubilee blockade). After two weeks of owning Olive Island, the flag won Napi Peak from Tempestblitz from the flag Vanguard, because he had stopped playing.

At the time, Peperox's net worth was around 400k. Once Napi Peak was with the flag, Betorox became the governor and during his first week, he created two shops on the island. Caipirinha, a fine distillery for him, and a weavery, Golden Palace, which he gave to Peperox. Not long after Betorox had a disagreement with the flag, and unfortunately left the flag. Peperox stayed and because of his crew, the flag gave him Olive Island.

After two days of owning Olive, Steve (nowadays playing as Luxory), offered one million PoE for Peperox's crew. Since the crew had become smaller, with about 200 players and 20 shanghais (Mostly because of the creation of Squid Squad), Peperox renamed the crew and sold it to Luxory. One day later, he logs on to realize he was expelled and lost Olive Island. He got really shocked and sad to see that they didn't want to put him in the flag anymore, but at least Peperox got his first million during that week. After that, Peperox also sold his weavery on Napi for 800k, which made him have a bit over two million PoE.

Betorox then created another crew named Heroes (which he and Peperox are still in until today), and then Peperox started merchanting for PoE. He made all he have today doing that.

In July of 2008 Peperox began playing on the Cobalt Ocean, although not frequently, he only logged on to Cobalt occasionally. In June of 2009 Peperox stopped frequenting the Cobalt Ocean, but he still logs in once in a while to meet old friends there.

In 2009 Peperox won an ippolito from Atlantis, although it was a terrible booty, the ippolito came in the vessel's owner chests.

From 2009 to 2016 Peperox focused on trading and blockading. He helped in several blockades in the flag Chocolate Coated.

From 2016 to 2017 Peperox took a break from the game, coming back to try the Obsidian ocean and playing a lot since then.