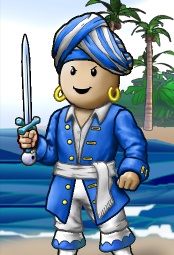 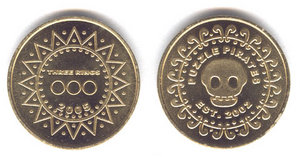 Scupperer is an enigmatic figure who first appeared as a hostile PvP tart on the Yohoho! Puzzle Pirates Forums in late 2003. He quickly developed into something of a forum jokester, primarily using edited graphic images, but wasn't seen much on-line until 2005 when he burst onto the scene of Viridian, forming one of the first crews in the ocean there.

Around the same time as the opening of Viridian, Scupperer won the island of Cnossos Island on the Midnight Ocean, which led to some of the most memorable forum tarting of all time.[7]

Scupperer began his adventures in Viridian with the ultimate goal in Viridian is to take the island of Terra, so he could be titled "Scupperer, Ruler of Earth."[8] After having successfully done so, he stated it was overrated, and sold the island to Infierno De Los Diablos. Scupperer then went slightly insane, changed the name of his flag to The Borg, and went on to blockade many more island, culminating in one insane day with 5 simultaneous blockades involving 4 different flags. (Corona Reef, Conglin, Kirin, Prolix Purlieu, Viridis).

After this, Scupperer stepped down from rule of The Borg, which was promptly renamed back to Scuppering Seven Seas. After a couple of monarch changes, and the loss of all island holdings, Scupperer and his crew, Psychopaths of the Seas, left Scuppering Seven Seas to join Requiem. With Requiem, Prolix Purlieu was taken back, and Scupperer was instated as governor once again, though he still insisted he'd left politics; proving once again, it is impossible to quit this game.

With the retiring of Maharet, Requiem folded, and Scupperer moved to Regnum Irae, where he slept peacefully for a long time, until Tainted Purity attacked Prolix and won it from his weakened grasp. Vowing revenge, Scupperer and the surviving members of Regnum Irae abandoned their former rivalries and merged into Vanguard, whose first act after the merger was to stir up a day with 12? blockades across the ocean, resulting in Vanguard winning Cochineal, but losing Olive.

Olive was later returned to Vanguard in a truly passionate act of kindness by MrsRambonette.

Later, in an attempt by the Blue Mooners / TNES ... errrr... Luxory to drain Vanguard of funds, all 6 of Vanguard's islands were blockaded simultaneously. Vanguard retaliated by attacking Prolix Purlieu. In a truly frustrating day of hopping from island to island defending as the attacker cheaply threw small ships around to the smaller islands, Vanguard managed to win Prolix Purlieu, while defending 5 of their islands, but regretfully losing the outpost Conglin.

Since joining Vanguard, Scupperer has helped to sponsor naming events for the upcoming Hadrian Island opening, as well as fundraising events for Vanguard.

Part of Scupperer's notoriety comes from his offbeat image humor in the forums. Here are some highlights:

This egg design was made by Tiggerlilly as part of the Sea Change bribe for tying for third in Scupperer's Backwards Blockade on August 11, 2007. It was made in the same style as The Ringer Egg Campaign. 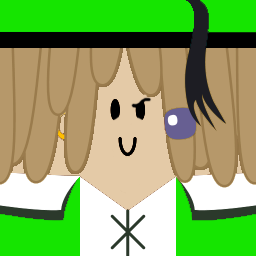