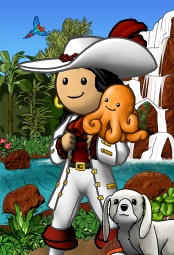 Mzluan, or "Mzzy" as she's most commonly known by, has been a pirate on the Cobalt Ocean since June 23rd, 2005.

Mzluan first washed up on Midnight over five years ago, though somehow she wound up on the Cobalt Ocean (she swears she can't remember how she did it). She began her career in the Silver Skulls with Lightbringer as her captain. During her stay in the Skulls, she served as Light's personal "bulldog" and princess of the flag Rising Storm. Following Light's first departure and drastic changes in the Skulls, Mzzy decided to head over to Midnight where she joined up with longtime friend Wheels. After a brief stint with Wolf's Dragoons, she decided to come back to Cobalt where she wandered over to Uncommon Valor to join her hearties Aryelxandra and Criptripper.

After a brief hiatus into the real world, Mzzy came back to discover that her beloved captain had come back. With Light's return, Mzzy joined him in the newly formed Ship of Fools where she stayed for the remainder of Light's second "tour". After Light left for good, Mzzy decided to join her dear friend Nymeria in Mischievous Drifters. Her move to the Drifters was the mark of Mzzy's return to the Cobalt Ocean, following numerous breaks from the game.

Despite already creating Chinadoll to join Rum by Gum, Mzzy began spending more time with the crew and began contemplating moving herself over instead. After much deliberation and endless talks with one of her oldest and most dearest friends, Mzzy decided to make her final crew change and move her pirate over to join Aarghbird in Rum by Gum where she's been home ever since.

She is well known for her obsession with clothing and portraits and "juicy booches" that are never forgotten. She can often be seen pillaging with her hearties, rigging on Sea Monster Hunts, slaving away in one of her stalls, or engaged in private tells while hiding in her manor. After years of being known as a notorious flirt, she has since calmed her ways after joining forces with her beloved Spongebob...somewhat.

She is currently a senior officer and flirt of the crew Rum by Gum, and a lady of the flag Mixed Nuts.