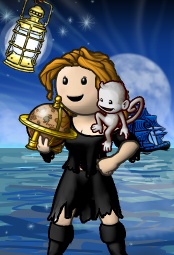 Millie is a senior officer and first mate of The Legends, and a princess of the flag Crimson Tide on the Midnight Ocean. She used to be captain of the Skull Hunters.

Millie has played YPP since November, 2004. Millie joined the Skull Hunters in May, 2005, and became captain when Skullhunter left the game. She was joined by many crewmates from her previous crew, and the crew continued to grow into an active, fun-loving group. Sadly, the Skull Hunters ran their course and the crew recently went their separate ways. Millie joined The Legends in May, 2007. She manages All Things Metal on Alpha Island and Blade Runner on Winter Solstice.

Millie is responsible for the reorganization of Crimson Tide's Flag Council, prior to taking up the mantle of royalty. She collects ships with the fishname Hagfish, and was presented with three of these as a gift from Owenthebald when he left the game. Millie was also the first pirate in the Midnight Ocean to achieve a Sublime in Shipwrighting, and held the only sublime for about 7 months.

On September 18, 2006, Millie won a red monkey in a mini-event at Nemesis's monday poker on Ice. The challenge was to compose a poem in 10 minutes which contained the words 'Capybara', 'Poker', and 'Nemesis is pretty' - with Nemesis awarding the familiar as a prize. Millie also had the good fortune to belong to the winning team for Team Drinking OCL in 2006, and thanks to the skill of her teammates is the proud owner of a white octopus named Humbug.