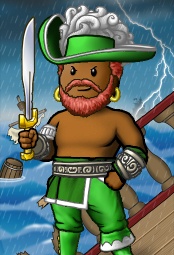 Madcrash would find the most success in his career as a new pirate on the upstarting Obsidian Ocean. He would create the crew The Light Brigade and recruit his brother, Herieman and Johka as the core of the crew. The crew grew steadily over the beginning of Obsidian's life cycle and peaked at number 2 on the crew fame board.

Since Obsidian's death, Madcrash has since returned to Emerald, where he is a senior officer in the crew Heroes United, and a royal in the flag Chocolate Coated Chaos. He is currently the governer of Ix Chel.