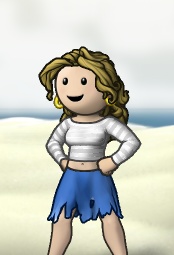 Pixiebell (or Pixie) is a pirate on the Sage Ocean. She is a captain of the crew Fatal Obsession and queen of the flag Pretty Reckless.

Pixiebell is loyal to her friends and loves to spend time chatting. She loves a good forage, but also enjoys sea monster hunts and especially crew pillages! Pixie is rubbish at gunning and probably always will be, but that doesn't stop her lending a hand if it's needed. She also enjoys the odd game of Poker and while she never really looses any PoE, she also doesn't win all that much either; but it's still fun!

Pixiebell is captain in the crew Fatal Obsession, a crew built upon friendship and trust. She hopes to be there for a long time. She is an active member, helping with pillages, making donations and talking to a variety of people.

Pixiebell thinks her crew is awesome and doesn't know what she would do without them. There are a few special people who make the crew amazing and they know who they are, but Fatal Obsession always welcome new pirates and enjoy meeting and getting to know different people.

Currently Pixie is not all that rich and so she doesn't own any of the above. However... one day it might just happen.

Pixiebell hopes for a long future surrounded by her closest friends and crew mates. She is sure that whatever happens she will be there for others in times of fun and the bad times. Therefore, the future looks happy.