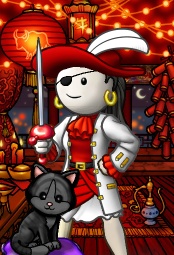 Lamoxlamae is an fleet officer and surgeon of the crew Midnight Star and member of the flag Riot on the Midnight Ocean.

She joined in August 2007 and started subscribing August of that year.

Lamoxlamae is a strange person who generally keeps to herself, unless cracking jokes in her often dark and slightly dirty sense of humor and generally prefers puzzling in combat situations such as Atlantis trips or blockades over normal pillaging. She also sometimes holds random tournaments.

Her favorite colors are red and black, but as she can't afford black, expect to see her in red and white. She is the owner of two boats, a house on Cnossos, a dog named Azadi, a black cat named Harelequin and a yellow rat named Crackers. The boats are her most prized possessions and both are furnished and painted in the Lunatic Saloon tradition.

She currently has an eyepatch and a peg leg.

A red/white Baghlah and Lamoxlamae's first big purchase in Y!PP, The Fascinating Angelfish is slowly becoming a fully furnished ship. Currently the Aft Hold has been reformatted into a trophy room showing off her collection of colored eggs. A fully-furnished bar sits in the center of the duty stations in the main hold. The bar is decorated with crates of hemp and barrels of Sugarcane replacing the crates and supplies that once occupied the space for a distinctively relaxed look. The Cabin will become a portrait gallery hopefully by Spring 2009 and she's not quite sure what to do with the main deck, though she's slowly gathering ideas. This is Lamox's favorite pillage ship whenever she can scrounge up enough hearties to form a crew.

Ships Lamox once owned but are gone for some reason or other.

Won by Lamoxlamae in a "Let's Make a Deal!" game during the 2007 Riot Christmas party. The boat was painted red and blue and sailed for about four months before being sunk in a mission to Atlantis. All that remains is a greeting card that says Lamox won her.

A navy/white sloop she won in a writing contest Summer 2008. The boat is named for the Anakin Skywalker's customized starfighter and was painted to match. She was bought in April 2010 by Xule for his sweetheart, Alniyat.

She joined up under the crew Lunatic Saloon on her very first pillage because it was the most fun she'd had yet on the game and hasn't been disappointed yet. She quickly was promoted to officer status and began being tutored by MrsSnape and Sweetandi in the fine art of being a captain, but they kind of got busy and forgot and so the training never was completed and so she's learned everything by trial, error, and Pardner poking her very hard when she messes up.

Her first Real hearty and roommate was Tyce and the two roomed together for three fun months until in October 2007 when Tyce had to quit Puzzle Pirates due to work being in the way. She acquired his home on Winter Solstice (even though she later relocated to Cnossos, his red and blue cutlass, his furniture, his clothing, and his almond & white dog, Azadi. Azadi is especially precious as the dog is an in-game memorial for Tyce's lost real-life dog, and he gave it to her as he knew she'd take good care of it.

In April 2008 Tyce returned under the name Thario and again was rooming with Lamoxlamae in her house in Cnossos island. Things were fun for awhile until real life called her away from Y!PP for a little while only to return in August 2008 to the following note left in her house:

Hey Doll, if you don't see me anytime soon, I probably took off again. I left a new bed down stairs, and some other stuff. People are terrible in here. Mean and down right nasty. May go hit up another online RPG... see ya soon.

November 26th Lamoxlamae logged on and found her leg was missing. She's not sure how it happened, really, as she hadn't been on any sink boats recently! She suspects that she got really drunk and forgot to feed the dog, which resulted in loss of her leg. An alternate hypothesis is that an instakill in SF cost her leg... ooops. Nobody is certain, however.

Now thumping around with a pegleg, Lamox started going on more trips, especially to the Cursed Isles once it was released. She loves the challenge of a small boat, even if the prizes generally are nothing more than tan rags. Dozens of sinks on big boats later, she was slightly wet but fine. No, it took sinking on a sloop with Beartooth on December 19, 2008 to make her loose an eye! ...That and cultists wanting a new necklace.

Early 2009 saw poor Lamoxlamae grounded, but she couldn't stand life as a landlubber and returned back to her pirating ways in April 2010. Alas, her former crew had fallen apart. It seemed all that had remained the same were her ships and pets when a hearty offered her a chance to join a new crew, Midnight Star.

Pardner tells you, "You mean how did I pick who to hunt?"

Pardner says, "so if you type /who by itself you get the list of every vessel in your current arch, and how many people are on it. If it has more than 7, it's asking for pvp"

Pardner says, "so then you /vwho boat name. That tells you where it is, and you can click through the people to make sure they are not awesome at SF. It also helps to find flags and crews you've never heard of, because then there is no backlash. For instance, all lower case crews are almost always safe"

Pardner says, "Then you have to figure out where they are. if you ask all the innbots near the island that are mentioned -- have you done that before? Asked the old salts where things are? Anyway, they usually give no information or useless information"

Lamoxlamae says, "Yeah, though they usually say nothing's around"

Pardner says, "if you can't find where they are that way, then the safest way is to just blatantly ask the captain of the other ship where they are sailing. They usually answer, if you sort of phrase it like you are thinking of applying for their job. If they do, then you certainly don't have any guilt about it :D"

Pardner says, "worst-case you get an alt on their ship to look at their chart, and puzzle for a battle to assuage your guilt. It's all far too complicated really. It helps to have one (alt) with like, some random incred trophy."