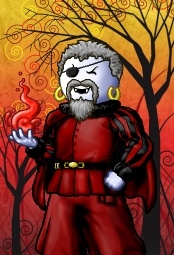 Xule is a captain of the crew Pirates of the Dark Sea, and king of the flag Booching Blaggards. He was the governor of Cleopatra's Pearls, and established the trading post Tomb Traiders on the day trading posts were released, 21 January 2010. He migrated from the Hunter Ocean where he was known as Linchpin.