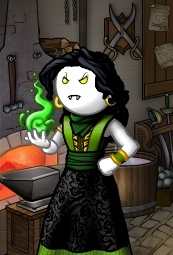 Alniyat is a pirate on the Midnight Ocean.

On a windy, rainy morning, sometime in the fall of 2006, a pirate who had boarded a ship to Midnight ocean got caught in a storm and marooned on the beach of Quetzal Island. Unable to find a ship to take her to her destination she spend some time exploring the island and some more time trying to repair ships, causing more damage than she repaired. One fine day she was checking other peoples shacks when she stumbled upon a lazy pirate sitting in his shack with no less than ten bottles of rum. She dragged the landlubbering Linchpin out of his shack by his ponytail and got him -kicking and screaming- unto her ship. Their ships have been known to fly across the ocean, faster than a cannonball ever since.

A few months later with Benison and Meteorswarm, armed with a grand fleet of three sloops which they had purchased though very very unpiratey means, they formed their own crew, the Crimson Coast Pirates. There are two things Aerie values most on Hunter: her beautiful sloop -the Proper Roach- and her rat Anuj (the cutest, prettiest rat in the ocean). She never ever keeps any pieces of eight on her, having a tendency to spend as soon as she has enough to purchase something, hence she's permanenly broke.

Still she felt the call of Midnight so after Benison moved to where she was going in the first place, changing her name from Aerie to Alniyat and making a fresh start on the shores of Nu Island.