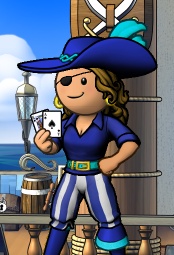 Sweetandi is Senior Office of the Lub Monkeys.

Sweetandi was never meant to be a main. She was created as one of many pirates made for gaming. Many alts took shop jobs to make PoE, all for the purpose of playing games. On a few desperate occasions the miscellaneous pirates went pillaging with random crews to make PoE.

One special day in June of 2007, Sweetandi worked as a jobbing pirate with the cowboy-themed crew Lunatic Saloon. This job changed her whole pirate life. At the end of a very fun pillage, she asked if she could join the crew. Pardner, the ever so wise guy captain, asked why and Sweetandi told him that it was the most fun she ever had on a pillage. She also said that the crew liked to have a great time. Pardner responded enthusiastically and invited her to join as a full time member.

After a few months she and crew member Cldragonx went through officer training. They were trained by Jackcannon and Pardner. She was promoted to officer. As soon as she was promoted Sweetandi ordered her first ship ever. A few days later the Touchy Sardine was christened. She then the renamed the sloop Sweet Andiandi following the standard rename rules. Moving fast through the ranks she was soon Senior Officer along with Mrssnape and Berylofun.

She soon became addicted to Atlantis and went whenever she got the chance. Many successful trips and many sinks, left her longing for an injury. On September 19, 2007 she was jobbing with The Phoenix Warriors when they went down. Her wish had been fulfilled. Sweetandi finally got a pegleg.

In the meantime Captain Pardner became very busy, not being able to spend as much time with the crew he loved so much. So he temporarily promoted Sweetandi to the captain position and soon after she was titled Princess.

Sweetandi got bored with no Pardner around so she recently left Riot and joined her hearty Daisydahling in her new crew, the Lub Monkeys.