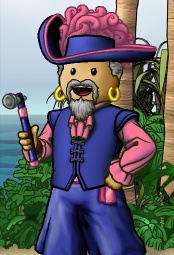 Pardner is a fleet officer of the crew Good Omens and a member of the flag Riot. He sails the Midnight Ocean.

Pardner spawned on the shores of Beta Island and quickly found a home in the ranks of the crew Barnacle for Brains. When it became clear that he would not have extensive recruiting powers in that successful, established crew, he took a few mates with him to form a new crew, the Lunatic Saloon. The crew rejoined Incredible, and Pardner found himself in charge of the flag's foraging operations.

While with Incredible, Pardner incited an event blockade with only cutters and merchant brigs against the flag Riot, and invited other flags to compete as well. The flag Fairwinds also took part.

After the breakup of Incredible, he then took his crew to the flag Riot.

Pardner was at the forefront of Riot's entry into the BK Bumper Boats event on August 4, 2007, which allowed that flag to win an Antediluvian Conch in a blockade setting.

He was leader of the PVP team for Riot's entry into Moonlighting's Namath Island Giveaway, and spent multiple hours chasing opponents' war brigs in order to secure the victory for his flag's team. For his efforts, he was rewarded with the governorship of Namath Island at the end of September 2007. Naturally, his rat Howdy was allowed to live on the shores of that island for a brief time.