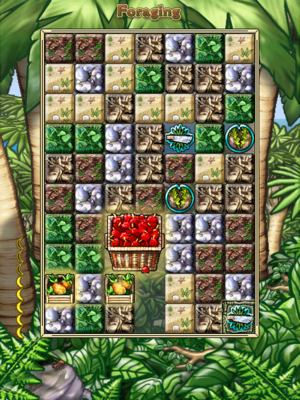 A typical foraging board

Foraging is a puzzle by which pirates can gather commodities (fruit, rare gems and gold nuggets) from uncolonized islands. It may be accessed from a ship ported at an uninhabited island by clicking on the hold, and selecting "forage for commodities" from the menu ring. One labor hour is used for each container of goods which enters the board.

Pirates may also forage for chests containing special items in the Cursed Isles, or during an expedition for PoE. Because the emphasis is different (speed not efficiency) in the Cursed Isles, foraging sessions there are not rated. These foraging activities are free (though in the case of Cursed Isles, a bravery badge or subscription is still required) and do not consume labor. 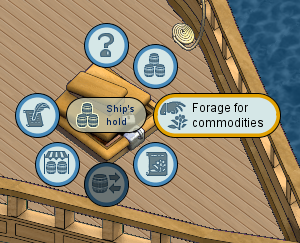 The objective of foraging is to retrieve goods from uninhabited islands in order to sell it at other islands. Foraging is performed on board any ship ported at an uninhabited island at the vessel's hold. Progress in the puzzle is indicated by a column of bananas down the left-hand side of the board - each banana represents one crate of goods that needs to be cleared in order to complete the puzzle, and each crate is worth an hour of labor. If a pirate does not have enough labor hours remaining to complete a full set of bananas, the puzzle will start with some of them pre-filled.

While a pirate still has labor hours remaining, the puzzle may be performed in practice mode at any time, by pressing the Practice button, located on the right-hand side, beneath the ships speed, damage and bilge meters. This will cause the puzzle to clear, displaying a foraging report reading "this session was not rated", and buttons allowing the pirate to continue in practice mode or to dismiss the puzzle. If there are any chests on the board when the Practice button is pressed, they must be cleared before practice mode will start. Pirates with no labor hours remaining will enter practice mode automatically.

The basis of foraging involves clearing tiles in order to get crates of fruit to the bottom of the screen, and hence into the ship's hold. Tiles are cleared by forming lines of three or more, similar to Bilging and Treasure Haul, save that it involves rotating tiles with a 2x2 square instead of swapping two tiles, and working downwards instead of upwards. Pieces can rotate both clockwise and counterclockwise.

Note that either mouse button has the same effect on the monkey and shovel. Setting the left-handed mouse in the game options swaps the button functions.

Like the other crafting and carousing puzzles, foraging is free to play one day a week - the current schedule may be seen here. Normally on free play days, a pirate without a labor badge or subscription is still able to produce labor while puzzling. However, with foraging it is not possible to collect foraged commodities on free days. Instead pirates without a badge or subscription will puzzle in practice mode only. In addition, they cannot accept foraging offers from the noticeboard. They can, however, ask the pirate on board to manually /job them to the foraging ship, and play the puzzle that way. When pirates without a badge or subscription start foraging, the following message is displayed:

Only labor badge holders may receive commodities from foraging but ye may play the puzzle.

Whenever a container is queued for insertion into the puzzle - that is, whenever a labor hour would normally be used - the following message is displayed as a green system message:

Alas, ye need a labor badge to forage. Ye can purchase one in the palace shop of a populated island.

Pirates may forage for PoE in chests on an expedition with no badge or subscription, and for special chests in the Cursed Isles with a Bravery badge (or a subscription). A Labor badge is not required to forage except at an uninhabited island.

There are five normal tile types in total, and each represents something that is typically found on an uninhabited island - specifically: rock, foliage, wood, sand and soil.

After every few moves a container will enter from the top of the board, up to a maximum of three. Regardless of its contents, each container uses up one hour of labor from the moment it appears. This means that abandoning the puzzle without clearing all containers from the board will waste labor hours. It's worth noting that the time between moves does not affect the score.

There can be a maximum of three containers on the board at any one time. This limit consists of three crates, two baskets and one crate, or one chest and two crates. To give an example, then, if there is a chest on the board, and the next container spawned to enter is a basket, it will not appear until the chest is removed, but once that happens it will appear immediately.

Clearing everything from underneath these containers will clear them from the board, and place them in the hold of the ship. Different islands have different forageable fruits - to get full value they must be sailed to a different archipelago and sold to a market. There is one gem for each archipelago, and only one island in each archipelago will buy gems.

Chests in expeditions and Cursed Isles have a different appearance, name and contents, but follow a similar pattern. 1x1 chests contain a little PoE, 2x2 a moderate amount or a low value item and 3x2 a large amount of PoE or a high value item. (See also: Cursed chests.)

There are also various special pieces which can appear while playing:

Clearing more of the puzzle pieces in combos will increase the number of special pieces which appear.

Unlike Bilging and Treasure Haul, Foraging does not have combos for clearing normal pieces. Instead, the scoring is based on containers cleared from the board. It's possible to generate combos by having more than one container clear from the board in a single move. It has been suggested by the developers that the clearing of containers is the only thing which is used when calculating forage scoring. [1] Clearing more than one container in a single move scores much more than clearing only a single container at once. Bigger containers score much better than smaller ones do. Each successive container cleared seems to get an increasing multiplier (e.g. 1x1, 1x1, 2x2 scores much more than 2x2, 1x1, 1x1). Clearing containers quickly and efficiently also increases a pirate's score. Furthermore, getting a crate(s) stuck can decrease a score dramatically, since it is likely a large number of moves will be wasted in trying to obtain a special piece to clear the crate.

There is a major glitch in foraging scoring in which foragers have to cause a cascade of pieces, even just a single 3-piece clear, to be broken after the last container clears, as described here. If a cascade is not present after a combo it will be completely ignored which results in a big score decrease. A video highlighting this bug may also be found here.

Scoring is exactly the same whether the puzzle is using labor hours or is in practice mode. Like the other crafting puzzles, foraging is still classed as rated, even while practicing.

The puzzle likely has an idle penalty which is applied after a lengthy period without moves, assumed to be ten seconds. A players rank will change dramatically on a session that contains a large number of idle penalties, however the duty report remains unchanged, this is likely a bug.

Any player with fleet officer privileges and a labor badge, who is aboard a ship that is ported on an uninhabited island, may post a foraging offer. This allows pirates to be paid an amount for each item they forage. It may optionally be posted to the notice board, where pirates with a labor badge may apply for the job.

In order to get full value for the fruit that has been foraged, pirates must sail to a market in another archipelago. These types of voyages are generally called fruit running. Markets in the local archipelago never purchase the fruit spawned there. Players who operate a palace or fort may choose to purchase the fruit, but usually only do so at significantly lower prices.

The foraging puzzle was introduced in release 2008-08-27. In this same release, all units of gold ore were broken down into 10 gold nuggets. The prerequisite that pirates must wait for ten minutes before being able to forage on a ship that a pirate had recently whisked to was also removed in this release.

Gold ore was introduced as a forageable commodity in release 2005-03-28.

Before it was changed (in release 'Happy Holiday Fruitcake', in release 2004-12-15), foraging allowed pirates to gather spawned commodities, which then could be sailed to a colonized island and sold to/used by shoppes. However, some players quickly figured out the schedule on which these commodities spawned, and acquired what was felt to be a disproportionate share of the 'found' wealth, which also had a large impact on the economy. These flaws inspired the Ringers to make changes to the foraging system, creating the process that now exists.

The ability to forage until the completion of a fort on an island in mid-colonization was added with release 2004-10-21.

The ten-minute prerequisite for foraging on a ship that a pirate had recently whisked to was introduced with Alpha release 2003-06-24.

Foraging, consisting of a one-click-to-forage system as it originally existed, was introduced with Alpha release 2003-06-05.

The following trophies are related to foraging: