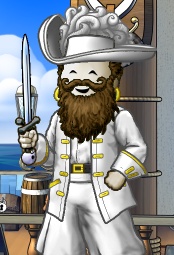 Fiercepirate is a fleet officer of the crew Greek Fire, and member of the flag Post Mortem, on the Meridian Ocean, previously Viridian Ocean. However he has pirates on all oceans, originally primarily used for Booty or No Booty, now used for activity, and was an official BoNB host, as Switcheroo.

Fiercepirate was originally a pirate, part of a now disbanded crew (name forgotten), where he was threatened that if he lost in a battle, which was 1 vs 21, he'd lose his pay. After that pillage, he left the crew and went to the crew Hippy Killers.

The day that the parlor badges debuted (coincidentially, his birthday), he left on hiatus. One day, he randomly decided that he missed Puzzle Pirates and returned, finally joining a crew, Sea Knights, which, after a couple weeks, merged with demonites. He was a senior officer, after quickly moving up the ranks. He participated in the Viridian Harmattan IX blockade on behalf of Antheas with Carpe Diem, and was sunk six times, earning the Driftwood Trophy, as well as getting 6 fish. He now resides in the crew Greek Fire as a fleet officer.

Booty or No Booty

7 Golden Tickets combined, all at the BoNB event.

Won a Golden Ticket on Oblivious IVa, cashed in for box number 6, and won a black/black sheep. Also won a Crate o'herbs as a surPRIZE.

Won another Golden Ticket in a reverse auction, with a bid of 0 PoE, cashing in for box number 6 again, and winning way onstage. Chose box 6 (again!) and kept it throughout the whole game, knocking out the familiar in the first round, ending up with a skull. Don't believe me? Go here.

Won a 3rd Golden Ticket, by observing what present Nobooty placed last (Gold/Yellow bow), chose box 6 yet again, winning a Blue urn. Also won ANOTHER Golden Ticket in said box (Gold/Yellow bow), as a surPRIZE. Question: Which 3 players lost a familiar on the final round? ALSO won a Gibbet in another surPRIZE. Question: What was done to the boxes on the Halloween Edition of BoNB?

Won a Red/Black Clawfoot Tub as a surPRIZE. Question: Name 7 meats that you eat at Christmas.

Got a refund for my ticket, after picking...Yep, you guessed it, Box 6.

Cashed it in for...well you know. Won a gold bandana.

Won a Lump of Coal as a surPRIZE.

Picked box 6 and won yet another gold bandana.

The PoE is Right

Second contestant called down, winning bidder for a pair of Blue/Blue Brass Knuckles. Played 'The Cut' and won an Orange/Green Scimitar. Picked Box 6 in the 'Number Wall' and of course, lost with the 10 PoE box.

Won a white/red exotic carpet as a trivia prize.

Won a treasure chest for the idea of 'Any NumbARR'.

Third contestant called down, winning bidder for 4 Red Dye Barrels. Played 'Any NumbARR' and won a Tan Striped Shirt (female), but lost a set of 4 mugs. Picked Box 6 in the 'Number Wall' and won 10,000 PoE. Lost in the 'Showcase Showdown', underbidding by over 80,000 PoE on a Cutter renamed to 'Brand New Car', and a Grey/Maroon Throne.