Greek Fire is a crew that sails the Meridian Ocean. The crew currently flies the flag of Post Mortem.

Greek Fire was founded on May 29, 2005, by Professeur, the crew's original captain, and first mate Joff.

In a rather short period of time Greek Fire grew to become a strong crew on the Viridian ocean. The first flag that the crew was in was Moros de Mindanao (MDM).

After a short while Professeur thought it better to move the crew into the flag Brethren of all Coasts, where the crew Death's Shadow was already a member. This move ultimately brought Professeur and Kenna together and they were married in game a short time later. 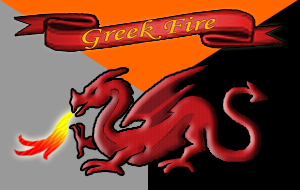 After being in the flag for a while, the flag started to degrade and Professeur tried his hand at leading his own flag, Le Feu de la Mort.

Shortly there after Kerix also left the game for a short while to do real life issues, and Redrumcherry moved the crew into the flag, Teh Booch under the leadership of Blackmaria.

After about a month, Redrumcherry stepped down and promoted Montecarlo to the captaincy of the crew. Montecarlo kept Greek Fire in Teh Booch for as long as he could, but do to politics and not wanting to be at war and possibly loose some of his crew's ships, he decided it best to move on.

Dopefish a hearty of Joyceann, senior officer of Greek Fire, was more than happy to have the crew join his flag Revelation. Greek Fire had finally found a home in a flag that was friendly and always helpful, until turmoil tore the flag apart in late June and early July of 2006.

Oneeyedbob, senior officer of Greek Fire, and Montecarlo co-founded the short lived flag Tears of the Phoenix, but after a few weeks, real life interceded again and the flag was disbanded.

Greek Fire then became an independent crew for a while but finally ended up joining the flag Post Mortem.

At this time we are not accepting any flag invitations. If you still would like to talk to the captain, about joining that is fine. Please DO NOT give random flag invites. Thanks ~ Montecarlo

This be the crew of Greek Fire! Back in the day, Greek Fire was the deadliest weapon on the seas...and it has returned! We are accepting members all the time so don't be afraid to ask to join.

Breaking the rules will result in the following reprimands:

Promotions are not made soley upon your stats, those are just some of the pre-requisites for the position. Your character as a person, and your willingness to help others and the crew will also be major factors in any promotions that may or may not take place.

Keep in mind that begging for promotions is frowned upon and does not help you, but hurts you.

The Captain has the final decision in all promotions beyond pirate.