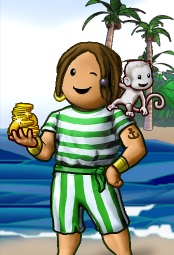 Warbaby is a senior officer of the crew Scourges of Seven Seas and a member of the flag New World Order. He sails the Viridian Ocean.

Warbaby started playing Puzzle Pirates in the crew Aurum Est Potestas under the flag of Rum Running Dragons in the year of 2005. Not long after, he, Thomie, Jaarmin, and Jexx started a new crew called Mutiny. The crew joined a flag New World Order and he, along with Thomie, became a prince.

Some time later Warbaby left the crew, because he felt that some people disliked him without reason, and made Scourges of the Seven Seas with Ivanovsky, Ltseppe, Royco, and Ljnjord. After rejoining New World Order with his new crew, he became prince again, and when Syth and his crew Roses Of Sharayn left New World Order for a short period, he became king.

After a while, the flag politics got to him, and he decided to take a break, leaving captaincy to Ivanovsky and monarchy to Safir. Warbaby continued playing in Skka's crew Polish War Fog with Ltseppe by his side. Ivanovsky decided not to keep the crew running, as he felt it was too much responsibility, and merged with Roses Of Sharayn.

A while later, Warbaby remade his crew, under the slightly different name of Scourges of Seven Seas and returned to New World Order as a monarch, replacing Safir who had stepped in while he was gone.

He had retired from the game, for personnal reasons but is now back returned and is Captain of the crew, Scourges Reunited and King of the flag RiddleBreakers.