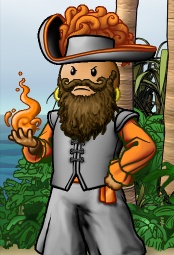 Thomie is the captain and cartographer of the crew Mutiny and a king of the flag Sea Change, though is widely referred to as Queen Thomie. He sails the Viridian Ocean and has been playing since April 2005.

Thomie was never a quiet pirate. Even in his first crew Marauding Seahawks, under the watchful eye of Karrotz, his aspirations were high. Word spread about Thomie's dream of making a crew and he was then kicked out of the crew for causing unrest. Some of Thomie's crew mates joined him and Aurum Est Potestas was created with the assistance of Edgie, Sinisterevil, and Reala. They were later joined by Jaarrmin.

Unrest soon came as bickering amongst the senior officers became commonplace, so Thomie and Jaarrmin decided to create a crew between them with the help of then fleet officer Warbaby and Jexx of a different crew. Mumbles of mutiny were heard from mouths of their former crewmates and decided upon this as the new name.

Thomie is now settled in Mutiny and, under the flag of Sea Change, has obtained a royalty position. Shortly after the blockade of Moab Island on 15th April, he was made King of Sea Change.