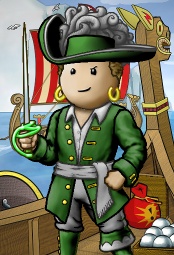 Therunt is a pirate on the Cobalt Ocean.

With vague recollections of a previous life, Therunt washed up on Dragon's Nest Island in September of 2005. Shortly thereafter, while jobbing, he met up with a pirate named Oneeyedfreak and joined the crew 'Masters of the Sea'. Quickly he achieved the rank of senior officer and was dubbed first mate. Having a knack for poetry, he soon converted the bland crew articles into more palatable verse.

After pillaging together for several months, Therunt lost contact with Oneeyedfreak. Eventually, he petitioned the Ocean Masters for the crew to become oligarchic and subsequently adopted the mantle of captain (dubbing himself poet). Though Oneeyedfreak reappeared after a long while and resumed activity, he eventually left the crew leaving it solely in Therunt's custody.