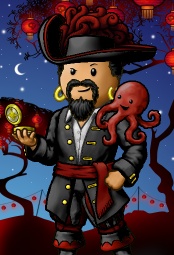 Strategy is a pirate on the Meridian Ocean and is captain of the crew Entropy and king of the flag Chapter Three.

Strategy has been around puzzle pirates for many years on multiple pirates until he came to this one. He restarted one of his previous pirates, Strategyking, after it went inactive and was deleted. Strategy started off his puzzling career by crew shopping for a few days. After spending his first 5 hours, he had already purchased a sloop and senior officer badge. He quickly expanded his wealth pokering and achieving ultimate in poker. The first pirate he connected with was Respectable, a pirate who was sitting on an inactive crew and flag, and quickly became good friends.

He joined Distant Truth and Lizhisheng, the captain, where he ascended to become a senior officer. He also became a lord in his flag Equinox. He soon helped build up the crew by finding key members like Cubman and Empresstamar, that helped further the crew's position towards greatness. Later he became the captain of Distant Truth, taking over the crew to manage the flags, where he briefly created his own flag, Infected, before giving up on it to join We Eat Chinese as a royal. During his time in We Eat Chinese, Strategy met many good friends like Rebeldog, and long time friend Eltorito, and worked with Burp and Mistabrosky to create a new ocean culture. He was involved with the flag's issues actively and helped build the successful flag.

Following Strategy's takeover of captaincy, Lizhisheng wasn't satisfied with Distant Truth and decided to make his own crew again, Federation of pirates. Cubman, Empresstamar and Swagyopuss left Distant Truth to join the new crew. The crew never really expanded much, and Empresstamar later moved to the Emerald Ocean and became a successful pirate there.

We Eat Chinese soon merged with Scissor me Timbers to attempt to create a "super flag" where Strategy then became a lord. Burp and his massive crew Panda Express started to fall apart as Burp had gotten banned. So some of Panda Express' members started new crews, including Eltorito and his crew Ocean's Finest. Strategy decided to merge into Oceans's Finest, and so Distant Truth existed no more. There he met other pirates like Lyndii and Ivyx.

He helped create and name the crew's new flag, Paramount's Saga. He helped grow the crew to #32 crew fame with 70 members. He then purchased an iron monger stall but wasn't really adept at the art of stall management.

His next few weeks were pretty busy and he had little time for the game, but returned on December 8th, 2012, to see that the crew had shrunk a bit, but had much more dedicated members in it. Continuing into the new year, Strategy remained active and continued to meet new people like Andrewjr, Slytheringod, and Baes. Strategy's friend Eltorito also announced that he was going to retire from the game, and he thus gave his captaincy to Ivyx.

Slytheringod moved accounts to Fiera. He also purchased his boat, "Dusk Till Dawn" and "Strategic Fate". After a few months of being inactive he returned to his now inactive crew, and decided that it was time to move on to new things.

While he was away, an unfortunate incident occurred with Ivyx, and he was banned as a result of it. Strategy never was able to speak to him again.

Strategy then created his own crew, Tactical Powerhouse, with Ophilia and Inler joined up and became friends. Strategy also created the flag Checkmate. The crew was relatively successful, breaking the top 20 crews on the ocean. He also had good times with Mikayy and Xoverselxo. Many long poker nights and crazy talks were had. Strategy achieved expert poker and improved his bnav to respected.

After some time he moved from his crew and flag which had since gone inactive and joined Revenge of the skellies, as he realized that for the moment he didn't have the time to commit to the crew, and made friends with Powerfox, Rawrzorq, and Mcstrike. Eltorito also returned to the game briefly and Strategy quickly invited him to join the skellies, thus reuniting some of his good friends.

Due to some account issues, members of "Revenge of the skellies" made a new crew called Talk Dirty To Me. Strategy created it for the eventual captain, Foxpower, the new account of Powerfox, as her original was hacked. In the first two days, the crew exploded with activity, reaching 55 members in the first few days. His old SO of his crew Inler, made a new pirate Bkn and he joined Talk Dirty to Me for some more shenanigans.

Strategy at this time really improved his extent of poker playing, now moving up to the 20k-200k tables and won the jade monkey trophy. With this new found PoE, he bought his first familiar, an octopus named "Cash". He also finished painting his sloop "Dusk Till Dawn" (black/black/black).

After losing interest in the game, Strategy jumped around from crew to crew in search of something to catch his interest. Eltorito left TDTM (Talk Dirty to Me) to start his own crew and flag. After going through multiple crews that just weren't quite dynamic enough for Strategy, he decided to give captaincy another shot. So he created Paramount, a crew he vowed would be involved in blockading and instead of focusing on volume of pirates in the crew, he would focus on quality. One of his old SO's, Ophilia, decided to join up as well.

Strategy got bored with his crew and hopped into the crew Trouble under the captaincy of Kcoolaid. He was particularly impressed with the crew's pirateness and fun factor. During his brief stay he met a few pirates including Baisons and Ironi. Trouble pillaged a bunch and had a ton of fantastic people, but lacked in one thing: blockading.

After dealing with funding multiple small 'cades but never being successful, Strategy decided to take another shot at running his own crew. With the help of Ophilia he started his new crew Dignified. He also came under the flag of Antheas looking for some blockading excitement as per his new-found friend Itearts.

During his time with Antheas, he was approached by Baisons to come back to Tsunami as they were looking for people to help build a flag that would be blockading. For the remainder of 2014, Strategy trained new navvers, and prepped the 'cade team. He got to know the likes of Feind, Hug, Joshuakiller during this training time.

Strategy also spent much of his spare time practicing blockade navigation with Irage and Camouflages, trying to further his skills to be of more use to Tsunami while teaching others.

By the end of January, Tsunami was ready to blockade. They helped organize a triple drop on Sink or Swim, winning their first island, Windward Vale. Tsunami also made an unsuccessful pass at Stormy Fell, but slowly built through Strategy's help the control of 4 islands: Windward, Carmine, Spectre, and Surtsey. Strategy continued to meet new friends with the likes of Cencul and Ashzz from Kraken's Bane. He also met the lovely Jennivere for the first time.

Eventually it became clear that Tsunami wasn't the flag that Strategy would have liked it to be, so he decided it was best to move on. After a brief hop into the flag Radioactive, Strategy created a new crew, Entropy, and a flag, Un-Koalafied, to get active in blockades. He paired up with Martinal, Sereyahh, and Liamm to try and achieve these goals. Rainbow Unicorns transfered Ansel Island to Un-Koalafied for safe keeping, and they had their first island. Unfortunately Strategy himself had to go inactive for around a month due to real life circumstances, and when he returned, Sereyahh and Liamm had taken over the flag and govern ship of the island. Angry with those decisions, he made the call to move to Radioactive again and start anew. During his time in Un-Koalafied, Strategy helped teach a new player the ropes of the game named Kiewie.

Joining Radioactive as a royal member, Strategy continued to seek out his love of blockading and politics. He helped the flag take over Stormy Fell and Dendrite fairly early on in his time with Radioactive. He grew close with the rest of the royal team Taytaytatty, Madies, and Littleshark, while helping Radioactive in the political waters. In August 2015, Radioactive decided to make Strategy monarch of Radioactive, and this was also the time that he began to become more interested in Board Admiraling for blockades.

During his time as the monarch of Radioactive, the flag had some contention with an up and coming flag lead in part by Captainholland and Ikan. During this time the flag blockaded islands like Dendrite, Stormy Fell.

In late 2015 he started his own flag with Jennivere, called Entropy where he continued to be active in the blockade scene.

For those that are for some arbitrary reason interested in Strategy's crew/flag history, here it is.

Strategy has navigated or admiraled in the following blockades: 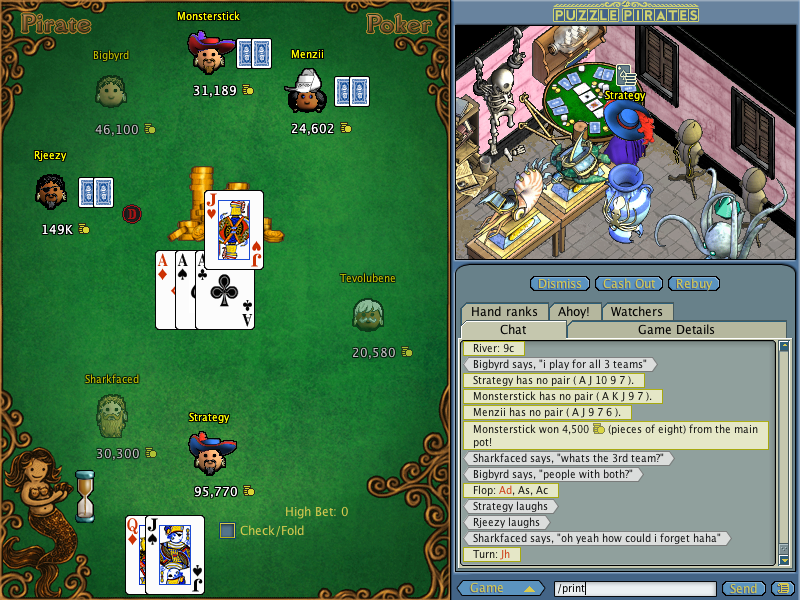 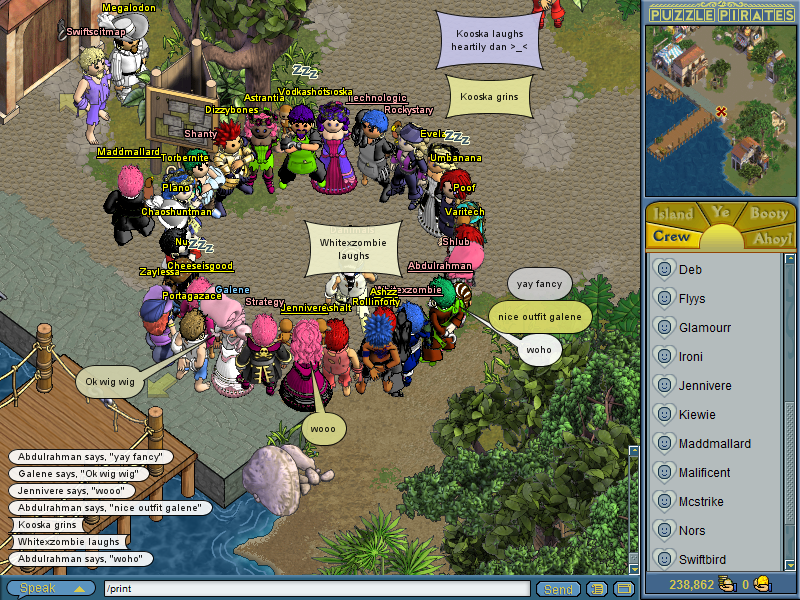