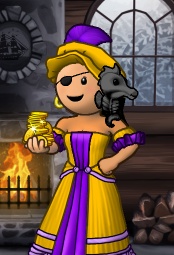 Empresstamar is a pirate across all oceans. However, her main ocean is Emerald. She also owns many pirates starting with the first three letters "Emp." Empress takes pride and enjoyment in learning each individual puzzle. Although only 7/22 ultimates so far, she knows she'll one day earn them all. While she wishes she could participate and master every part of the game, there's only so much time in the day. Making poe is at the top of her list, MAAing and puzzling on cit runs being her primary methods. She also enjoys maintaining five shipyards for extra poe. Empress' spare time outside of cit running is spent improving her stats and chatting with her closest friends. If given additional time and a mentor, she'd love to learn battle navigating.

Empresstamar is a highly experienced and talented MAA. Although she has the most experience with brigs, she's MAAed frigs, xebecs, brigs, and junks on a regular basis for:

For an increased MAA pay, she will generally do all the preparation work for her navigators, from setup to entry, so they only need to navigate. This ends up being 25-33% of the restock cut.

Empress originally joined YPP back in January of 2005. As she was very young, she found the game to be pretty fun although all it was to her at that point was "hey look, I can walk around this island and talk to people! This is SOOOO cool!" Her father, Boltbait, joined after a few weeks to make sure that Puzzle Pirates was "appropriate" for someone her age. After playing on and off for several years, Empress finally joined the game full time on May 7, 2012. After playing solo for a few weeks, she joined the crew Distant Truth, captained by Lizhisheng and Strategy. After a while, Empress left to create a private crew with a few of her good friends, Cubman and Astute. She was subsequently stolen from by Astute, and Cubman went inactive so Empress decided to move to Meridian with her close friends Samos and Subbie.

Empress was in Cubelets under the flag of Illusion for several months, where she made friends with Squishat. Samos soon requested that Empress join the flag she'd just created, flag: Meridian Refugees, where she remained for several more months. At one point, Samos and Misteria/Cerin began harassing Empress and Subbie, so they left to join Challenge Accepted (Emerald crew). Empress became Cartrunner's primary MAA for over a year, and she always had multiple set ups ready for him. Cartrunner retired from the game in December 2013, and Empress finally left Challenge Accepted (Emerald crew) in late December 2014.

She's currently crew hopping at the moment, looking for a good fit. So far she has tried The Atlantean Conspiracy and Rocket Science, the latter of which she left due to frequent sexual and personal harassment. She's finally back home in No Offence Intended.

As of April 2016 she is pretty much retired due to the mystical and much talked about Real Life and college, although she does log on every couple weeks to get her fix of carpentry or bilge.

Empress has obtained #1 patch on both doubloon oceans across several accounts, as well as #1 experience on Meridian. Little known fact: she actually hates patching despite having a talent for it. Self-admittedly, she is not the best patcher on Emerald. However, she still considers herself highly skilled and has placed in all familiar patching competitions since mid-2013.

Her competition placings can be found here.

Need to reach her outside the game for some reason? Alternative methods of contact are listed in order of preference. Make sure to leave your pirate name in your message, as she does not add/respond to people she don't know.