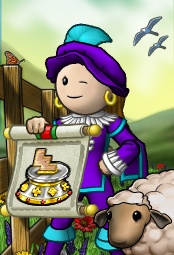 Squishat is captain of the crew Cubelets and queen of the flag Pandorica sailing the Emerald Ocean.

Prior to the ocean merge, she could be found on the Hunter Ocean.

Squishat joined the Hunter Ocean in June of 2006. She had seen an ad on another game site and had decided to check it out because of its "cute and detailed graphics".

Choosing the name "Squishat", a combo of the word Squish, and Hat, to form different combinations, she was sent to the Hunter Ocean as it was the default on her log in page at that time.

She was very impressed that there were no ads at all and that it was a game based largely on skill, and not fast computers or repeating mundane actions, and hence decided to stay.

She first wandered around a few crews at the beginning of her piratey life before settling down in Dark Seas in September of the same year.

At first a cabin person, it was about this time that she began her fanatical obsession with the Carpentry puzzle (deciding that her goal was to eventually obtain the ultimate trophy) and soon she was promoted to officer, and gradually fleet officer.

While in Dark Seas she met some pirates who she still keeps in contact with today. The earliest of these are Blackcat (her captain at that time), Pegno, and Robunmas. Some other good pirates she met later include Zual (who had since moved to the Malachite Ocean as Wia), Katej and Tinytot.

After some disputes in mid 07, the crew broke up and a number of new crews with the same members followed. Having run into some problems with the captain, and still unable to obtain ultimate even after illustrious in Carpentry, she took a break from the game in late 2007, returning occasionally to ensure that her pirate wasn't deleted.

In Aug of 07, she met Deliverance on a random occasion. Deliverance, then in the top 10 carpers of the ocean, convinced her that the game was still fun, and thus she came back as a regular pirate, completely abandoning her former games.

In September of 07, Blackcat quit the game, and thus all the members went separate ways. Among them, Robunmas was already in the crew Up Your Booty, a crew which Squishat had heard of too. She then decided that she would join UYB as well.

The crew was merged into The Abyss early in 2008, and Squishat was promoted to officer then.

In December of 2008, Squishat met Terrify, and after a proposal from him in early January, they officially came together. Also with the help of Terrify, Squishat was able to gain the rank of fleet officer in The Abyss.

The owners of the crew had left the ocean, and slowly The Abyss started to disintegrate. After some minor crew hopping in early April 2009, Squishat settled into -Frozen- as an officer.

By 2010 through a decision by Nargon (Captain) Squishat was made senior officer of Frozen. However, Frozen slowly started to become less appealing to Squishat and gradually became less active.

In early April of 2010, a hearty of Squishat's invited her to join his crew. She then decided it was time for a change, and joined his crew. Very soon though (in a day) she felt that his crew was not the right crew for her.

So Squishat joined a crew that was under the same flag, Mirage as an officer.

After 2 weeks in Mirage though, Squishat felt that she didn't belong, and so decided to return to -Frozen-.

Through late May and most of June of 2010, Squishat was appointed to the royalty of the flag Eye of the Storm, in charge of fund raising.

She ran a raffle at the end of May and had another event planned soon thereafter, but real life issues forced her to take a slight break from PP in mid-June, which she originally planned to return in mid-July.

She then excused herself from the flag, but in end June, Gneiss, who ran the event together with her, approached with her the idea of forming a new flag together. Squishat thought about it, and since Gneiss and her work very well together, hence they formed the flag -Tenacity- on June 30, 2010.

After forming -Tenacity-, Squishat's activities in the game turned to efforts for the flag, and on Aug 22nd, -Tenacity- achieved #1 flag fame for the first time on Hunter.

Through collaboration with others such as Cinquains and others, Squishat was consulted on, and helped bring to life the October and December forum events.

Around January 2011, however, Squishat realized that YPP had become more than "just a game" to her, and that she needed to leave. So she planned her last two events for the flag.

And with a collaborative effort from her fellow flaggies, was able to run a writing event for CNY, and a Plankathon Event a few weeks later.

She then took her leave from the game on February 20, 2011, taking a nearly year-long break, returning occasionally to help out in blockades, and then only returning to enjoy the game in December of that year.

After returning to the game in late December of 2011, -Frozen- no longer felt like home to Squishat, and -Tenacity- had disbanded due to a number of circumstances.

She then decided to join the flag Private Party as an officer in Misan's crew Intoxicated.

When the merger happened in Jan 2012, Squishat had the pleasure of meeting pirates from the Sage side.

In April of 2012, Squishat still didn't feel like she belonged in Intoxicated, and finally decided that she was ready to try her hand at managing her own crew.

She then created the crew Cubelets after asking Princessmg (a then-acquaintance from -Tenacity-) and Benazo (a fellow SO of -Frozen- for awhile) to join her in the adventure of a new crew. Misan and Lucicafer helped Squishat quickly get her fame up enough to join back into Private Party.

From April to August of 2012, Squishat enjoyed blockading and getting to know many more pirates in Private Party, such as Bestdamnfool, Marleen, Sweetmoth, Jjkrell, Naqash, Dasoccaplaya and many more.

By the end of August 2012, Maliya and Imrans, both long-time friends, persuaded Squishat to join Illusion after working with her in a number of blockades. Feeling more like a guest than a resident in Private Party, Squishat accepted the invitation to join Illusion with her crew.