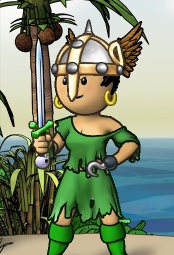 Gneiss started off her pirate career on July 11, 2006. She was an independent pirate for quite some time, but eventually joined the crew Reality which was run by Ruiz and Mrmonkey. After the crew had gone dormant and with the departure of Mrmonkey, Gneiss was one of three members still in the once #1 crew. Eventually she left the crew Reality and was independent again.