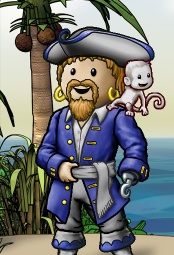 Cire is a senior officer of the crew Good Omens and a lord of the flag Riot on the Midnight Ocean.

Cire washed up on the shores of the Azure Ocean on August 17, 2003. He joined the crew Pirates of Another Place. The crew soon became inactive and he joined the crew Birds of Plunder. The crew prematurely made him an officer and instructed him to dockpress other players. He soon left this crew and was invited by Russel to join the Plunder Cats, where he received quality training.

When Midnight opened, he purchased a jewel encrusted beta special and recreated his pirate. Eventually he became a senior officer of Plunder Cats and was asked by Captain Stormy to be the crew's titled representative to their flag, Midnight Armada. When the Plunder Cats disbanded at the end of 2003 Cire, joined by former crewmate Mansfellow, formed the crew Knights of Plunder. The crew soon joined Midnight Armada and shortly after Cire was made a lord again. When the crew achieved royal status he was made a prince. While in Midnight Armada he took part in the blockades to take Winter Solstice and Park Island.

In late summer of 2004 Cire became less active due to a new job and stepped down as royal and captain. Not long after that he began to attend college and as a result fell mostly inactive. He kept tabs on the crew and eventually saw that it had become almost completely inactive. He eventually stepped in and declared the crew defunct and took it out of Midnight Armada.

He played sporadically for the rest of the school, not maintaining any meaningful stretches of activity. In the summer of 2005 he began to play actively again. Disappointed that many of his old mates were no longer active he decided to try out Cobalt with a couple of mates from Midnight. He had a short stint there where he captained the crew Explorers Guild. At the end of the summer however he once again became less active, though not inactive, as a new semester began at school.

Nonetheless as his beta special was coming to a close Cire was contemplating officially retiring from the game. The long-time player discount and an addiction to duty navigation, however, convinced him to renew his subscription for another year. During 2006 Cire began looking for a new crew to join. He tried out a few different crews before deciding he was unhappy joining a previously established crew with a lot of history. He then began his search for old mates of his that he could start up a new crew with.

His search was rather unsuccessful and he found himself slipping in and out of activity again, most considerably when he started playing in the public beta testing of Bang! Howdy. Meanwhile he kept his search up for mates to play with. Finally in the summer of 2006 he convinced a newly returned Devonin to create a new crew with him. They heard that Sprngweather and Saltycdawg were looking to create a new crew as well. They combined their efforts and joined by Whiplash they founded Good Omens.

Cire was a senior officer in Good Omens throughout Devonin and Saltycdawg's respective captaincy terms. In December he became captain and oversaw expansion of the crew with training and the recruiting of other veteran players. At the end of January of 2007 Cire's 2 month term as captain ended and he passed the hat on to Sprngweather. When the crew decided it wanted to be part of a flag he helped to create and construct Riot where he was immediately made one of Good Omens's titled representatives.

In April 2007 Cire was trained by Heksubah and became a fill-in jockey on Shanty Raid-io. He appeared on air twice, as a fill in for Abiona's scheduled show. His jockey career was short-lived, as not long after these two appearances Shanty was shut down.

In September 2007, when Atlantis was released, Sprngweather took a strong interest in it, which led to Cire becoming interested. Sprngweather and Cire became well known as a team for running Atlantis voyages. They would take turns navigating while the other would XO. Their interest in Atlantis eventually lessened as the popularity of navigating made it harder to fill ships.

Meanwhile, Cire had maintained his role as a leader in Riot. After the flag obtained Namath Island he was admiral for two defenses of the island in January 2008, a victory against Azarbad the Great and a loss against Rums Runners. Though he has had opportunities to admiral other blockades he has passed on them so that he could navigate instead, which he strongly prefers.

In May 2008, Cire took interest in the newly released Malachite Ocean. He was drawn to the ocean because of the high number of Midnight players who had, at least for the time being, migrated there. He took an interest in the ocean's geography and memorized a significant portion of it before rum use was turned on. After spending some time on the ocean he became frustrated with doubloon costs and the general culture of the ocean. He began spending more time on Midnight, which he had still been playing and eventually stopped playing on Malachite all together.

Shortly after Cursed Isles were released in November 2008, Cire became interested in them. He has spent much time as both a navigator and a puzzler on many voyages.

While Cire was captain of the Knights of Plunder the crew renamed a sloop to Noble Knightfish. This served as the crew's flagship while the crew was still active. When the crew became defunct Cire donated the ship to Midnight Armada to use in Park Island's navy. After the navy system was changed and all navy ships decommissioned Cire reacquired the Noble Knightfish from Midnight Armada. Since then Cire has renamed several more ships to Knightfish.

Cire's third renamed sloop, the Wartime Knightfish, is the sloop Cire uses while his flag is at war, knowing that it is at risk of sinking. The current version is the second incarnation. Cire's first Wartime Knightfish was sunk in a PvP versus Pjotr while Riot was at war with Marauders Pact.

Cire's first renamed War Brig was named the Master Swordfish in a reference to the Master Sword, the main weapon used by Link in the video game series The Legend of Zelda. The ship is colored green and grey and has brown banners. The ship is furnished with items related to Zelda, including many wrapped gift boxes inscribed with quotes from the Zelda series. It is also the home of several pets with Zelda themed names.

Cire has had one other ship renamed as well. The Lucky Charmfish was renamed for no shanghai charge to be given away in his event Drive the Snakes Out of Emerald.

Cire was a navigator or an admiral in the following blockades. This list may be incomplete.