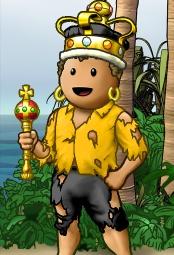 Skaterkid is a senior officer in the crew Atlantean Explorers and a lord of the flag Blades of Sage on the Sage Ocean. He enjoys Battle Navigation, Gunnery and Distilling. He loves sloop/war brig pillages, Atlantis attacks, Navigating in Blockades, and earning the common PoE.

He then took an extended leave of absence to work hard on his school work. When he returned he was surprised to find out his pirate had been deleted. He quickly created a new pirate of the same name, and began to gain his experience and renown back.

It took him a while to find a crew he enjoyed, but he finally came across a friendly crew named Down The Drain. Bazman was leading a pillage and Skater came across it by chance. Bazman allowed Skater to B-nav one of the battles, and he was able to show Bazman what his pirate page could not. He maxed the ship Max-0. Bazman was quite impressed with his performance. Skater quickly moved up the ranks in Bazman's crew and became one of the most dedicated pillagers.

It was not long before Skater desired more and wanted to become a senior officer. He was not allowed to do so in Down The Drain so he created his own crew and named it Rising Glory. It became a great crew and ranked #16 on the crew fame list. Because of his success as a leader, he was granted Prince of the flag Down The Lucky Rays. He was also offered the position of monarch but declined.

He then had to take on quite a few responsibilities in Life and had to take another break. When he came back his crew had fallen from over 120 pirates to a total of only 13. After being back for a while, Down The Drain decided to merge their crew with Skater's. Then a couple more months went by and Skater did not enjoy the responsibility of captain any longer, and merged his crew Rising Glory with Posiedon's Executioners. He renamed a Sloop in memory his crew (Rising Glory) and still uses it to this day for his most Elite of pillages. Skater stayed within his flag and kept his loyalty.

In the crew Posiedon's Executioners Skater got along very well. Often times just chatting with crew members and making silly jokes. Mergiote, Mattymatt, Rumbarron, Gobb, Kaylahki, and Chezza are the main friends in the crew. They enjoy parlor games together and laughing about coiled sentences immaturely. Mergiote (Mergi) is the best spades player he ever knew. Whenever they would play together, Skater's stats would always go up. Mattymatt (Matty) was the main pillager of the crew, but schooling got in the way and pillages became more sparse. Matty is a very good leader and organizer, and makes boring days to the most fun of all. Rumbarron (Rum) and Gobb (Bob?) are the "pranksters" of the crew planking the Captain, making "Mattytard" the Monarch of the flag, posting the most embarrassing quotes on the crew issues, and turning your sentances into humorous meanings. Kaylahki (Kay) is very fun and silly, often times the source of the humorous "twists". Chezza (Chez) is a very helpful, caring person. She would do anything to help out a fellow hearty, and defend pirates when others indicted them. Being in this crew was the most fun Skater has had on sage so far.

After about two years in Down The Lucky Rays, Skater decided it was time for some Adventure. He searched out a crew that was very active, and that he could fit in well with. One day he came across some daring pirates known as Accoutre, Joshsivils, Kapytanhook, and Jezzabelle. They are a fun bunch, willing to help out friends in their piracy life. They are members of the Flag Blades of Sage and most are in the crew known as Atlantean Explorers. They do many Sea Monster Hunts, Flotilla Attacks, participate in Blockades and a few pillages here and there. Accoutre (The captain) is a nice mate, good leader, makes sure everyone has a bit of fun, and makes sure everyone gets along well with each other. Joshsivils (Josh) is known for his excellence in PvP'ing/B-naving. Ye might want to be careful with an encounter with "The Legend" as it might be ye last. Kapytanhook (Kapy) follows closley behind Josh in B-nav skill, and also runs good Atlantis trips. He's also know for his computer skills and laughable annotations, (and Yar's!). Jezzabelle (Jezza) is a great friend to have, as she always comes your pilly's, and is willing to be your "Woman at Arms"/Executive Officer whenever she's available. She is often on Puzzle Pirates 'till the early hours of the morning, and sometimes needs a reminder of the time. So far Skaterkid has enjoyed every minute of his new Piracy life, and looks forward to what else life has in store for him.

It has been a little over 2 years in Atlantean Explorers now. A lot has changed since Skaterkid first joined. Josh is gone, Kapy is no longer a royal, neither is Eazydzit, Vishnuzee, or Joeymck. There has been some that have come and gone as well. Jillie was royal shortly after my last update. Along with Spitfyre. They are great people. Spit is an amazing JC because of her super human typing abilities. Spit will also come on all your SMH's to gun/XO/MAA or just puzzle/defend. Jillie is the main Shoppe manager for Blades of Sage. She takes care of all the cloths, karkinos', and sea horses that we win on our SMH's and makes sure we get a good price to donate to flag funds. She is also a great JC, XO, MAA, and an amazing Sailor. She will puzzle hours on end for you and be happy as ever doing it.

Devilduke (more commonly known as Gangforage) was a more recent Royal who has come and gone. He was made royal in Skater's absence and he was very excited when he saw Devilduke was in his flag. They had been friends for quite some time before hand, even met each other in real life, but never been in the same crew before. After a few months, however; they soon realized that they could not work well together. They are both as stubborn as the other and did not make decisions well, both being royal. Many issues came up between the two of them (and other Royals) and it came to a point where Devilduke was Expelled from Atlantean Explorers. He was then banned from Puzzle Pirates a few days later.

Backtracking a little bit, Fixation joined BoS and was also made Royal. This was a few months after Devilduke had joined the flag. She was a great addition to the flag. Skater and Fixation worked very hard together to make Scrimshaw's economy come back to life when BoS took control of the island in Scrimshaw XXIV. They ran many promotions and tried events to encourage activity there. Fixation was soon burnt out from all the effort she had put in, however; and soon quit the game (again).

Knightsglory is the most recent addition to BoS. He is a good B-naver, runs SMH's, has a good sized fleet of ships, and is a fun guy to hang around in general. He's very kind and giving, takes pleasure in other people's happiness. He's been known to give people familiars just because.

All in all there has been a lot of road bumps for Skater in this flag, but much more good times. Skater wouldn't trade a single day in BoS to be anywhere else.

This section is a stub. You can help by expanding it.

Skaterkid is the owner of the following renamed vessels: