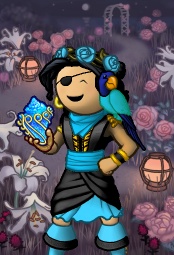 Fixation is a captain of the crew Nerdfighteria Island and a queen of the flag Pyx Lax Dax on the Sage Ocean.

Fixation first started her Yohoho Puzzle Pirates career as Allies on Cobalt. After becoming a bit bored with the lack of blockades, she decided at the request of Djs to try Hunter for a while. Djs loaned her the ten doubloons to purchase an officer badge and she quickly set to work making spreadsheets, happy for something to do. Shortly after moving to Hunter, she made a new set of friends, including Ov and Rapportus.

Around this time, The Eye was gearing up to defend Aimuari Island against a previously unheard of 22-strength Brigand King. She volunteered to help, and was surprisingly chosen by Rapportus as a jobbing contact. There was also another drop on another of The Eye's island, Sayers Rock, the next day. She was chosen as a jobbing contact there too, and quickly fell in love with blockading. She then moved from blockading flag to blockading flag, joining In War we Trust, Castigo X, and even made her own flag, My Pants. Once Malachite opened, Fixation moved there in hope of a fun new ocean and created Greco. Fixation completely retired her pirate on Hunter, moving her into Rapportus' flag Ports R' Us, occasionally coming back to be a jobbing contact once in a while.

After being burnt out by politics on Malachite, Fixation moved to Sage. After wandering around in various crews, she made herself at home in Questionable Content. She eventually was given a royalty spot, and spent many a blockade in the flag's ventrilo server giggling with the monarch of No Parking, Wendyrz.

After her stay in No Parking, Fixation decided she needed a break and moved to her friend Lissanna's crew Safety Scissors. However, shortly after both Nooblar and Lissanna went off to camp, and Fixation stepped in to help Deedeeiam, Rafikie, and Argyle run the flag. She hosted the event Boosting Barbary for over a month, which was a in-depth experiment to raise attention of Barbary Island. Once Lissanna and Nooblar came back, Fixation decided to once again to take it easy, enjoying a short stint in Wild Twisted Fun where she became better friends with Fearlessphil and Aimela.

After a break from Puzzle Pirates, Fixation came back to the game, ready to dive back into playing again. She was formerly senior officer of the crew Off Constantly.

Blockades that Fixation has participated in.

Trinkets that Fixation currently has.

Current and past avatars

Avatars that Fixation has commissioned from other players.