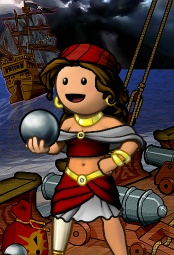 Samos is a pirate on the Midnight Ocean, the Viridian Ocean, and the Malachite Ocean, as well as most other oceans. She began upon her puzzling adventure in May 2004 as a simple greenie.

The prize, a sloop, was renamed the Flava Virago by Lelantos in reference to the Greek goddess Athena in Book VI of Ovid's Metamorphoses. The story is located in the Y!PP Forums.

Samos comes highly recommended as both a gunner and a sailor, having been repeatedly blind-jobbed for her Gunnery expertise. Despite the fact that Samos can load four cannons in one round and reverse-circuit with the best gunners in the Midnight Ocean, her beloved ultimate still evades her -- but only on the Cerulean Ocean. Samos achieved ultimate guns on the Meridian Ocean in December 2012.

Many know the darling Samos by her alternate character name, Lexicon/Karpathos.

Samos has partially retired from the game, returning regularly from September to April so that she can blockade and play politics.

Samos loves all things Greek. She can read/write Ancient Greek; she follows a Greco-Roman pantheology; and she corrects announcers on TV and people IRL when they mispronounce both Greek and Latin words -- usually from the other end of a Nerf Gun.