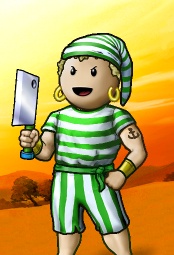 Peterljr started on the Viridian Ocean in late March 2005. In June, he found himself as a cabin person of Viridian Sailors with Blitzsam, the captain at the time. By late July, he had worked his way through the ranks and became a fleet officer of the crew. Unfortunately he had gone dormant for about a month before he returned in September under a new captain, Sonofab. It was under this captain in which he was promoted to senior officer and later expelled in October for declining to join Infierno De los Diablos. After being expelled, he was taken into Tierra Firme temporarily until he made enough money to buy a Captain's badge.

Prior to Tigerleaf III, Peterljr brought sloops and cutters into blockades to practice blockade navigation. As time went on, he began to participate and navigate in more and more blockades. Antheas, El Cazador, Requiem, Serpientes Del Mar, and Synergy are just a few of the flags he has navigated with. He took part in the defense of Terra Island on February 12, 2006 when Antix, the governor and monarch at the time, took a brief hiatus from the game.

A few months later and a thanks to Antix, Peterljr officially blockade navigated his first Sage blockade at Ashkelon I.

In May of 2006, Peterljr became governor of Ansel Island. This lasted until November 2006, a month after he took a long hiatus from the game. Also, Peterljr dropped from prince to lord after inactivity from the game. He returned from inactivity on May 13th to test Treasure Haul and two new ship types, the dhow and baghlah, at a blockade against the brigand king Gretchen Goldfang on the Ice Ocean. On May 27th, he navigated with his flag to contend against Antheas at Harmattan XII. On June 16th, 2007, he navigated in the first Brigand King blockade of Ansel II.

Peterljr recently created another alt by the name of Potatochips and joined Twiggy's crew Azure Knights in the flag Cervantes de Leon.

On November 10, 2007, Bagochips received an eyepatch after sinking in Jubilee II.

On June 15th, 2008, Peterljr and his crew Imperial Viridian were expelled from Imperial Coalition for reasons unknown.

Peterljr has blockade navigated a total of 62 blockades. Blockades in bold are in which Peterljr has admiraled in.