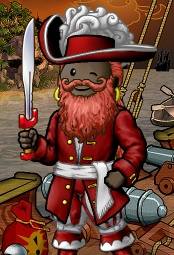 Ovodepata is a pirate that arrived at Viridian Ocean in 15th day of December of year 2005. The first place he landed was Sakejima Island, and lives till the present day at Jelly Belly's.

At start of 2007 after a big storm he vanished in Viridian Ocean´s waters, his whereabouts was unknow for months till he appears almost dead wearing rags at Viridis Island's beach.
Something happened to his mind and he lost some memories about it, he remembers he was in some strange island and something about a hidden treasure, but till now still a big mistery.

At September, 5th of same year he lost his leg fighting against the atlanteans, his first injury as pirate. Misteriously after exactly one month at October, 5th he gets his second injury, now he uses a eye patch to hide that, before the ship sunk he just could hear the clock warning passed midnight. At November 4th near the midnight he joined again to an Atlantis attack where the ship got sink, he tried check the clock but he lost his hand, and strangely again was passed midnight making exactly one month of the last injury and now he got a hook in place of his lost hand. This unlucky pirate once again got an injury at July 1st of 2008,and now has a starfish clinging at his face when he sunk at atlantis.

As trader he started to navigate all archipelagos memorazing routes. Become a forager, trading fruits between Garnet Archipelago and Jade Archipelago. After few hours foraging he did recieve the rank of Ultimate Forager.

At September, 2nd of year 2008 he was attacked by a Monkey boat called Adventurous Huckleberry, and without defences lost part of his cargo, as revenge he hunted for the rest of the day this apes and found another Monkey boat called Itnerant Pomegranate and, with help of the Senior officers Reef and Pettrinha, he defeated this crazy boat and won the ring of the Brotherhood of Bronze Pineapple.

At April, 19th of 2011 he was at Brisky's citadel run and heard some noises inside one of the chests he recieved as his share, opening it he found an ippolito aqua colored. Was the first familiar won by him.