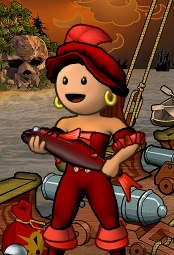 Pettrinha, a pirate on the Viridian Ocean, began playing Puzzle Pirates in February of 2006.

Pettrinha began playing Puzzle Pirates at the end of January 2006 on the Viridian Ocean. Normally dressed in maroon coloured clothes, she enjoys elite pillages and defeating Brigand King hunts. She is the proud owner of some beloved sloops and a war brigs, one called Voodoo Doll. She has houses spread all over the oceans but she usually stays on Kirin Island. She had two great teachers of the game: Captain Arthurr and Senior Officer Ovodepata. And her best friend that make company in her adventures is Vevorin.She is consider a cursed island addicted. She loves her pets, and her familiar and she usually collect all kinds of trinkets.