The monkeys in combat

The monkey boat, identified also by various fruit themed names, is a vessel staffed with rapacious monkeys which may replace a vessel in PvP irrespectively of fruit carried by either vessel. The monkeys target ships which try to engage in battle with another player vessel. When they appear, they may take the place of either ship in the sea battle. The monkeys reportedly like to rumble, using fruit as their bludgeon.

The monkey boat was implemented to minimize "double floating", where players sail a cargo of fruit on an understaffed ship and have a second ship sail alongside them to engage, should there be the threat of an attack by brigands, barbarians or another player ship. However, the monkey boat conflicts with regular PvP, disrupting regular attacks from other player ships [1]. Nevertheless, the monkey ship is beatable with a moderately staffed ship. 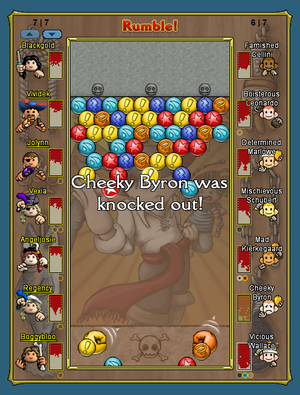 How Do I Encounter The Monkey Boat?

It is typical for players to embark on "Monkey Boat Hunts" in which a single player (typically an alt) will deport an island at the same time as another ship (typically a Merchant Brig full of fruit) and then these two ships will engage each other in battle. If the Monkey Boat doesn't intercept the battle, the players will wait until disengaging is possible, at which point they try again. This is a very time-consuming process, but provides results if the players are willing to wait. 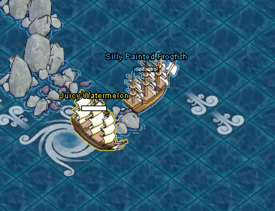 A grand frigate in battle with the "Juicy Watermelon"

A monkey boat can be identified by having a yellow name and ship outline. When intercepted by monkeys, the player ship receives the message:

"Behold! A band of ravenous simians has caught wind of the succulent treats stored in yer hold! They'll stop at nothing to get their grubby paws on yer treasure. Prepare for battle!"

Players aboard the other ship that was replaced by the monkey boat receive the message:

"Avast! A band of ravenous simians has caught wind of the succulent treats stored in the hold of yer opponents' vessel! They have taken yer place in battle!"

The fruit themed name is determined by the vessel type:

The individual monkeys aboard the boat are named after famous historical figures, including philosophers, scientists, composers and authors - for example, one monkey is named for Charles Darwin, author of The Origin of Species.

Includes links to wikipedia articles on the historical figure from which each name comes.

The following trophies are related to monkey boats: