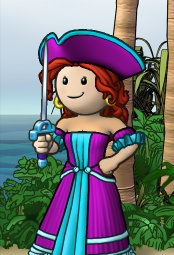 Ladyjai plays primarily on Sage, where she is the captain of the crew Fearless Phoenix and the monarch of the flag Tide of Terror. She is also found under the same name on all oceans.

Ladyjai, aka Jai, was directed to YPP by a friend during the summer of 2006 by a friend who knew of her obsession with pirates.

She started out by joining the first crew she happened across, Fallen Angels of the flag Tide of Terror, where she was taken in and looked after properly. She however left this crew one day to join her hearties in Angry, Young and Poor. Here she stayed, reaching the rank of senior officer and making a lot of friends, until one day a new crew, Fearless Phoenix, joined the flag and Ladyjai left Angry, Young and Poor to help out their captain, Richardvf, who was short on qualified officers.

However, Richardvf left the crew for reasons unknown and Ladyjai logged in one day to find she was now a captain. She was then promoted to lady of the flag Outcasts. Always loved in the flag officer chat of Outcasts, Ladyjai was a pleasure to talk to, a constant source of fun and witty comebacks to anyone who cared to cross her path. It is worth mentioning for future reference that a certain young pirate, Jordomonster, first met Ladyjai in this very flag officer chat where she chided him for his daily skellie hunt countdown. An unlikely way to start a friendship but nonetheless it happened.

During all these events, Ladyjai managed to save up enough to open 2 stalls, both on Wensleydale. One was an iron monger, the other a distillery. She was also manager at another 2 stalls, Lanzi's apothecary stall on Greenwich Island and Hyatt's shipbuilding stall on Lincoln Island.

Leaving the Outcasts and Joining Tide of Terror

Due to arguments within the flag Ladyjai took her new crew out of Outcasts. Left flagless for a while, Ladyjai worried that the crew would collapse. Luckily during the hallowe'en events in October 2006, she happened upon a few people on a chance pillage that invited her to join their flag. Ladyjai once again found herself back in Tide of Terror and decided that fate had brought her back here. She was promoted to princess of the flag and all was good.

Ascending to the Throne

Sometime in December the monarch of Tide of Terror, Chrisjb, left the game. Another pirate was put in the place of monarch but was overthrown due to some things being said out of the game. Ladyjai was at the centre of a mutiny, the monarch had been overthrown and she logged in to find again she had been unknowingly promoted again, this time to monarch of Tide of Terror, where to this day she still sits upon that throne.

In November 2006, Pinkpiglet merged her crew, The Pink Pillagers of Sage with Fearless Phoenix. Ladyjai now found herself surrounded by many new friends, who contrary to popular belief, she likes having around.

In April 2007, Shacky merged his crew, Floating Cash with Fearless Phoenix. Hopefully many a new friendship will be formed from this merge too.

Ladyjai resides in 2 houses on Sage, a cottage on Wensleydale she shares with real life friend Shadowzz and a bungalow on Admiral Island she shares with her piratey husband Jordomonster.

She may not have the best stats nor is Ladyjai the best at any of the puzzles but she is quite possibly one of the most likable people on the ocean. She never has a bad word to say about anyone who doesn't deserve it and is always willing to give people second, and even third chances, when everyone else would have abandoned them. Another thing to point out is that Ladyjai is undoubtedly the most co-ordinated pirate on Sage and has been awarded a card stating this. All of her outfits are aqua/violet, her stalls are both painted in aqua/violet and her ships are painted aqua/violet. Her swords are always blue/purple to match her outfits and her bludgeons are the same. She also bought an aqua/grey outfit to wear while she pillages on her renamed sloop.

Ladyjai is often found entering poetry competitions on the YPP forums under the name Gypsyjayne. The ribbon in her trinkets was won in 'The YPP Abecedary Challenge'.

Ladyjai is currently 'retired' (as is her alt Gypsyjayne).