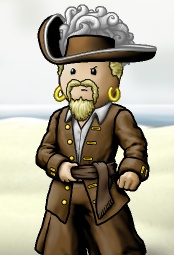 Jordomonster is a pirate who can be found playing on the Sage ocean. He is the captain of Kinetic Energy, and currently unnafiliated with any flags

Jordomonster is currently putting into port on Admiral Island where he stays at Ladyjai's Bungalow. He can often be found either at the docks or on the seas. He owns a sloop ported at Isle of Kent. Jordomonster was brought to the game after searching through beta games to test and quickly became an addict by some people's standards.

Jordomonster is infamous amongst his friends for 4 things:

Jordomonster once owned an ironworking stall but decided it was best to close down. He currently has 2 pets: a cat named JJ Samson, and a rat named Rat Rat.

Finally getting that pesky Incredible Bilge trophy. Having 2 legendary stats at one time. And getting Legendary battle navigation stat. ultimate Sails.