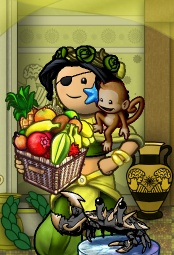 Kecapmanis is a sweet and saucy pirate on the Ice and Meridian Oceans. (Her name is taken from the sweet soy sauce!). Prior to the ocean merge on January 31st, 2012, Kecapmanis played on the Viridian Ocean.

Kecapmanis chose to name herself after a sweet soy sauce she uses when cooking. In keeping with this, she owns a renamed sloop on the Viridian Ocean to be called the Sweet and Saucy, which is her pride and joy. Kecapmanis, or Kecap, as she is known, likes to sea monster hunt and job in blockades and flotilla attacks (especially when there is a chance of sinking). Kecap was very pleased to receive a star fish injury in 2009!

Kecap has been a member of the crew Hell Avengers for a number of years, and has risen through the ranks to become a senior officer in that crew. Recently, she was also named as one of the captain's Officers in Charge. This means that she is responsible for making decisions regarding promotions, and other crew business.

Kecap has many friends on the Viridian Ocean. She also has some animal friends, including her pet crab named Cuddles, her rat named Sally, her dog named Inspector Rex, and her cat named Jess. Kecap won Lucky, her small dog, on July 14th, 2009 as part of the July gift campaign. Kecap is not friends with the carpentry puzzle. She hates carpenting with a fiery passion.