Hell Avengers is a crew that pillages the seas of the Meridian Ocean. The crew currently flies the flag of Jewelled Seas. Prior to the ocean merge on January 31st, 2012, the crew sailed the Viridian Ocean. 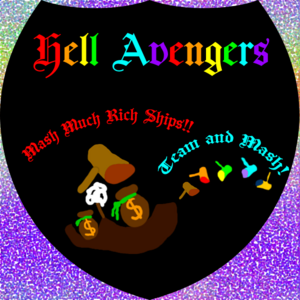 Hell Avengers was formed on the Viridian Ocean in 2005. Members of the Hell Avengers crew have a loony sense of humor, and pillage for fun (and of course for PoE as well!). They value friendship, loyalty, and experience over statistics. Although they may be small in their number of members, all of Hell Avengers' officers are highly skilled and highly trained; their pillages are generally well run and they work as a team in most everything they do. Hell Avengers' battle cries include the famous phrase of "team and mash", and their pillaging aim is to "mash much rich ships". Hell Avengers were moved from the Viridian Ocean during the ocean merge in early 2012. The crew will now continue their adventures on the newly-created Meridian Ocean.

The crew Hell Avengers was founded on the 31st of December, 2005, by Archilles, who was a former senior officer in the crew La Maledizione. He was captain, until he left to found the crew THE PRODIGY, promoting Lenna to captain. Lenna did an amazing job of bringing the crew closer together, and making it better. With the help of the rest of the crew, Hell Avengers made the top twenty list of crews on the Viridian Ocean.

When Lenna had to leave the game, Adrielle (who was a senior officer during both Archilles' and Lenna's reigns) was given the captaincy. Through the months, Hell Avengers grew to become a tight and amazing crew, where everyone trusted one another and were friends. They enjoyed success in their pillages, and supported one another in times of need. It has been these things, and the wonderful personalities of its members, which has made Hell Avengers an awesome crew for all the years of its existence.

In the few years that followed, Adrielle tried her hand at running several Sea Monster Hunting trips. Although these trips did not result in the untold riches sought by the crew, they did result in fun, and prompted many new members to join the crew. The crew also made several attempts to attack the Cursed Isles, but unfortunately, these trips mostly result in sinking (and a disappointing lack of injuries for the pirates involved).

In August 2011, Adrielle left Hell Avengers in the capable hands of her senior officer, Ellenya.

Hell Avengers, although small in its number of members, remains a strong crew. The crew is ranked as Blaggards, and enjoys rumored fame. They vow to honor their proud history of having fun on the newly formed Meridian Ocean for many years to come.

Prior to August, 2009, there were three additional rules listed on Hell Avengers' Private Statement. These were removed in an effort to relax rules, and recruit more active members into the crew. These are shown below:

When Adrielle was made captain of the Hell Avengers crew in 2007, she held a poetry competition for members of the crew. Judging was done by Adrielle, with imput from the crews' former captain, Lenna. The prizes were card trinkets and poe. The three top entries are shown below.

There once was a crew called HA
They loved to mash shippies all day
When a ship crossed it's path
The things got rough
But they'd always win with a YAY! - Milashka.

This is a poem about HA! We love to mash shippies all day! Sometimes we fall, you might agree, but HA's the BEST crew there'd ever be! - Berry.

Avenge the hell...
Wait, that tinkles a bell!
Hell Avengers is the best
Always better than the rest!
All the people who leave
Won't get a present on Christmas eve!
This is the end of this rhyme
What a great rhymer am i! - Runeplace.

Amazin' Adrielle's Art Ask was an artistic event held on the Yohoho! Puzzle Pirates Forums in September, 2009. Participants from the Viridian Ocean vied for the chance to have their banner or coat of arms selected as the official artwork for the Hell Avengers crew. The winner of this contest was Makawhawla, and the winning artwork can be seen at the top of this page.