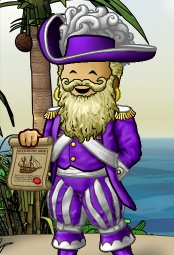 Jebus is currently the captain of the crew Crystal Waters and prince of the flag Paradise. He started playing on the Cobalt Ocean in June of 2005 but after his trial period moved to Viridian Ocean.

Jebus is now a helper for Requiem and Riddlemaker blockades.

After being quite an important person on Cobalt Ocean, and a battle navigator for blockades on the Midnight Ocean, Jebus moved on July 12th of 2005 to Viridian for financial reasons, having great dreams when he moved there.

When he first got to the ocean, he started working on his stats, so most of them were broad with half decent standings before he tried getting into a crew.

The first crew that he jobbed for was Salty Old Sea Dogs on the 29th July 2005, by Lifetakerman, a senior officer at the time. The crew was captained by LadyJules, and some of the senior officers were Lifetakerman, Alive (later known as Evian), Shaver (whom he brought into the crew with him,) Maltasdevil, Sarnov, and Risenflight.

The crew soon invited Jebus to join after the pillage and he accepted. Jebus never asked for promotions but was promoted to pirate and took a liking to gunning, in which he is always switching between a puzzle standing of legendary and ultimate.

When he became an officer it only took a couple of days to become a fleet officer as Jules knew he had potential. He then pillaged frequently until the crew broke down during the war between Spirits of Atlantis and Requiem. Just before the crew broke down, however, Jules promised Jebus a senior officer position.

Jebus, Shaver, Lifetakerman, Sarnov and Alive all pitched in to make a new crew, with Alive as captain. They called it Renegades of Life and the flag Equilibrium was later created.

Equilibrium went on to take Viridis Island with a lot of help from Chatnoir And Benjideblade, with Jebus, Alive, Zarine, and a few others as the team of royals.

Jebus and Shaver then decided it was time to create a new era, and as best friends in real life, they created a new crew called Drunked Gold Diggers.

Drunked Gold Diggers went on to be of eminent fame and ranked 17, in front of Renegades of Life, but, after a bit of persuasion from Alive, the crew merged back into Renegages of Life, boosting it to 351 members.

At this point in time, Jebus and Jules decided to re-create Salty Old Sea Dogs with Jebus as captain and royalty of Antheas. They were able to bring back most of the old team of senior officers as well. Jebus' future after that revolved around the Salty Old Sea Dogs, and to this day he is good friends with them all, except Alive/Evian.

Currently, Jebus is the politician and captain of Salty Old Sea Dogs with Jules serving as co-captain and senior officer. He is also prince of the flag that all his flags have been allies with, Antheas, and has great ambitions there.