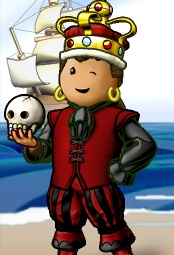 Evian is a pirate on the Viridian ocean, king of the flag Equilibrium and Captain of the crew Renegades of Life.

Evian started his life as Alive back in mid 2005. From there, he rose through the ranks of officer of the crew Salty old Sea Dogs before eventually taking control. During a war between the then flag Requiem and Spirits of Atlantis, Alive and his crew were in lock down as to not lose anymore ships. They left the crew and formed Renegades of Life. Shortly therafter Equilibrium was born, and grew to achieve a top 5 flag status.

Eventually Equilibrium gained control of Viridian Island from Ebrius Feles and the then monarch Saltake.Viridis VI The following week, Viridian was lost to The Borg in a closely contested battle.Viridis VII

Equilibrium also had a run on New Years Eve by attacking the flag SSS, who controlled Harmattan Island. Unfortunately with alliance breakdowns, this blockade was lost.Harmattan IV The following week however, Alive and Equilibrium were one of the supporting arms in Vessels and Jobbers for Antheas success over Harmattan, thus ending the SSS reign.Harmattan V Shortly after this Alive left the ocean due to personal reasons.

A couple of months later, Alive returned under the alias Evian and joined as SO and Blockade Admiral for Star Exporers under the Queen and the then close friend Kalani. After Star Explorers involvement in Terra V, Evian left the flag and formed Crystal Waters and eventually Paradise. Paradise became a strong but supportive flag in the short time Evian was in control.

Evian left the ocean and became Drake on Hunter Ocean, he handed the reigns of Paradise to close friend Arielmac

In March of 2009, Evian returned to Viridian and created the crew The Lazarus Project. During this time Arielmac rejoined Evian under Equilibrium, but once again Evian could not commit to a life on the waters.

In 2011, Arielmac moved her crew over to Puzzleholics Anonymous leaving Equilibrium back in the hands of Evian. In June of 2011, Evian announced his intent to restore Equilibrium to it's former glory, now having the time to commit to the flag. Evian renamed his crew from The Lazarus Project to Renegades of Life, in memory of the past.