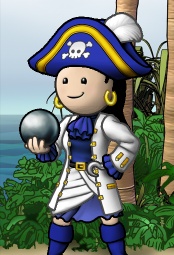 Inessa is a senior officer of the crew Gossamer and a princess of the flag Corruption on the Meridian Ocean.