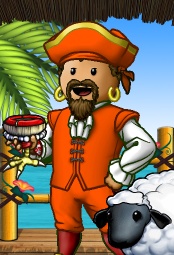 Aere is a pirate on the Meridian Ocean. Prior to the ocean merge on January 31st, 2012, he played on the Viridian Ocean.

Aere is a pirate who began on the Viridian Ocean. He began playing Puzzle Pirates under the name of Fullmoon in 2005. At the time he was a member of the crew Viridian Pirates. After a while of playing the game, he lost interest, and his character was deleted due to a long period of inactivity.

After this, he created a new character, named Aere. However, due to a second period of inactivity, this character also was deleted. The current Aere is a recreation of this character.

Aere went on to serve as an officer of the crew Tranquillity, and as a member of the flag The Blood Line. He later became a senior officer in that same crew.

Following the ocean merge in early 2012, Aere's character was moved to the newly-formed Meridian Ocean. He currently serves as a fleet officer of the crew Delerium Cordia on the Meridian Ocean.

Aere submitted a winning egg design in 2010. The egg that he designed was not for sale from the palace shoppe, but could be won.