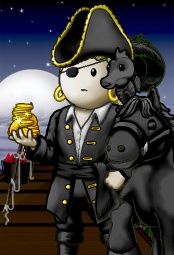 Hurtboss is one of the oldest pirates of Puzzle Pirates on Viridian Ocean. He went on duty for the first time as a greeter on 15/12/06 and has helped various greenies.

After a long period outside of Puzzle Pirates, Hurtboss' account got deleted. Since 8th July he is back in the active, and filled the spot of senior officer in the crew Resistance Is Futile, which was the first crew to actually job him. He has been given the title of Quartermaster after the blockade for Windward Vale (which Outlaw Forces won) because he XO'ed for his captain, who B-Naved for the flag. He loves all and every member of his crew and loved his flag at that time, Vanguard.

After a few misunderstandings arose in RiF, Hurtboss chose to leave the crew and settle alone on the Ocean.

2 short days after he left RiF, he created his own crew, Pride before Fall, with the only intent of making it's fame Rumored in order to join Vanguard with his mates. A day after the crew was created, the former RiF Captain and the mates he loved began a new crew, Reign of Chaos.

Hurtboss settled in this private crew where the hassle of acting responsible (which he hates) disappeared, because the crew is short and the only people in it are responsible for themselves. He fills the spot of senior officer in this crew and is a member of his Flag. As in RiF, he got his title, Quartermaster.

The crew Reign of Chaos got renamed to Phantasm, giving place to the Flag, under the same name, but remained the same otherwise.

Even though the crew is the same, in a desire to spice up and twist his gaming experience, Hurtboss has entangled himself in the Political side of the game, and got a royal spot in his crew's flag, Reign of Chaos. He has, since then, been stripped of his quartermaster title and made treasurer instead.

Nowadays, Hurtboss likes to hang around in different Oceans with his friends, mostly Swordfighting and Rumbling, trying to learn Swordfighting from his friends Porphyris and Bowserspower. It is extremely rare to see him at sea, which is subject of mockery more than many-a-times. He, however, stoically takes the hit and comes back saying, 'umad'.

Hurtboss, after a long Puzzle Pirates career, decided to throw in the towel and quit the game on October 3rd, 2011.

As almost all would be quitters, Hurtboss came back to the game shortly after, and proceded gaming as usual.

After the game yet again became stale and unentertaining, Hurtboss thought about an idea him and Remorse had in the past, one of creating a new crew just for the kick of it, and have some friends around. This quickly spinned into creating a Flag and becoming politically active once more.

With Copacabana as his main alt, Hurtboss and Remorse founded Colloquial Extortion and the flag Requisition, names which Hurtboss thought of himself, since Remorse isn't creative at all. Since the creation of said flag, Hurtboss got involved deeper in blockading, becoming the spokesperson of Requisition, and the on-duty jobbing contact and land admiral. He enjoys all time spent here with one of his best friends, and is currently what takes most of his PP time.

After Requisition's downfall, and somewhat of a breaking up with former Requisition members, Hurtboss is now mostly retired (for good, this time), logging on once every 15 - 20 days, just to meet up with his crewbies and to be dragged onto a mind numbing CI.

Hurtboss' YouTube channel was regretfully accidentally deleted sometime in July, 2012, and he has no plans to recreate his channel at the time.